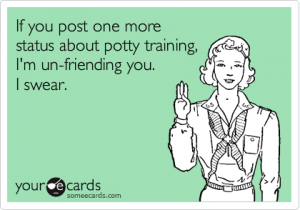 Kevin and I aren’t the type of parents that were ones to say “we won’t do that” or “we would never do this” about parenting before we got here. Yes, we believe in teaching some values, like not acting a fool in a restaurant, but we know that a lot of things aren’t apparent until you are knee deep in them. That all being said, we did state “we won’t wait for him to be ‘ready’. We are going to get on this potty training thing early”. Ha….HAHAHAHAHAHAHAHA. Yeah. Idiots. Landon is a very independent kid. There is no real “pulling one over” on him. He is too fucking smart. So here is the break down of the journey.

We started the potty thing before the 2 year mark. We bought a potty, he used it at school randomly and the thrill of PEE PEE POTTY was there but the time wasn’t right at all. He had no clue if he needed to go. He just knew, sometimes we go to the potty and sometimes something happens.   We tried to push it, but it didn’t work. He just got angry. So no potty. Whateves.

This go round was different. He was knowing WHEN he was needing to go. Our best move was putting him outside with either nothing on or just cotton shorts. The “free ballin” seemed to help him know and us to know he knew. He would be playing and run over, stop and look down to pee. We could see it connecting. FWIW, Pull Ups did nothing for us. He never felt it get wet…it only really worked for pooping. On top of it, it seems like the pull ups were irritating his “boy area” so we just ditched them and went for big boy underpants full on. Best decision. 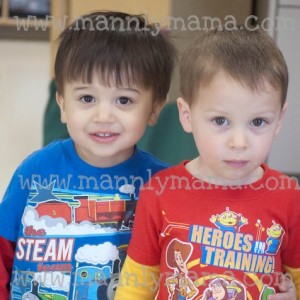 This was also the sign that he isn’t really the kid who wants the asking every 5 minutes routine. He gets pissy about it. We have had more meltdowns because of that then anything. Now I have to say at first, it was a must. He would get wrapped up in the TV and have an accident. He needed to reminder even though he hated it.  Honestly we did that maybe a week or so and now he is a pro at it. He asks us to pause the movie so he can potty. It was maddening at the time but it was so short lived, so keep at it if you are. TIP: It seemed that if we said “In 2 minutes we are going to pause the movie and go potty”, he did much better than just stopping it. He seems to like to have the heads up. Fair enough.

Next step was daycare. And I already talked about that here . The routine of school helped set it up. Within the first week, we was going by himself and not even telling anyone (yes there were skid marks). Within the last 2 weeks, the only real accidents are just getting some on his pants while going potty. Not a “real” accident to me. He is so routine with it at school now, he is training his best friend. He is taking him to the potty with him and Josh has kicked ass at it. I asked their teacher how Josh was doing and she said “fantastic…but we can’t take the credit. Landon did all the work!” I am hoping this is a sign he will be a helpful big brother :).

To note, he does want to pee standing up. This makes some people cringe but I have to say he does really well at it.  Our toilets are just the right height. He tucks his shirt under his chin, pants at the ankles and aims right into the bowl. He made more of a mess sitting so I am perfectly happy with this. He can do everything on his own…which means no more bending for pregnant mama!

He is still in diapers for nap and nights which is fine by us. He doesn’t seem bothered by the change. We also do diapers on the long car ride to the river. Since it isn’t a big thing for him, we just roll with it plus usually one way is a nap anyway. Now he does seem to be peeing more overnight but could just be part of the process of learning to go more before bed. Many changes of PJs and sheets in the mornings lately. Even this week he is going a lot more in the afternoons when we are home. Hopefully that is a good sign.

So this post kinda turned into a ramble but I wanted to get it all out there. Every kid is different. I believe we got really lucky. We saw our opportunity and ran with it. He has done great with it and we couldn’t be prouder. We haven’t had to deal with the poop issues (only 3 accidents of that nature). We haven’t had to deal with the confusion over diapers sometimes. He seems very confident and we don’t even have to have a prize after every time now. I couldn’t have even imagined this happening so quick just a month ago. We had no real plan. We winged it and it totally worked. I never read a book. Never looked into the 3 days method (that shit sounded like work!).Just went with our gut.

So that is my word of advice. Don’t feel like your kid needs a philosophy. Toddlers are weird. They make oddball decisions for no reason. Just do what works for you. If that means stickers all over your floor, so be it. If it means you have to set an app to “call” your kid for the potty every 1o minutes? Do it. It is all trial and error, just some of us are more willing to admit it 🙂

Update: Oddly enough, Katie over at Sluiter Nation is right in the middle of the potty training. She is talking about it today. Just hop over to see another perspective (Eddie and Landon are around a month apart for age comparison).

5 thoughts on “Potty Training: The Philosophy”