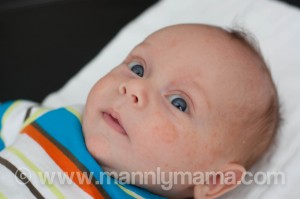 Oliver is officially 2 months old. He is growing in every way every day. Just this week he found his hands and is interacting with his mobile gym thingy. He smiles and swats at the hedgehog. He is progressing from the blob state!

We had his appointment this past Friday. To note, when I picked him up from daycare, his new teacher was just so upset about him getting shots. It was the sweetest thing to see only after 5 days in her care! As luck would have it, beyond the regular 2 month appointment woes, we had the new added worry of possible chickenpox.  Ya see, not an hour before his appointment, I found out I have shingles. Lovely. While it sucks, my main panic was “I can’t have a 2 month old with chickenpox”. So we marched into the appointment and immediately ushered to a room. I would later see a giant post it on Oliver’s chart reading “MOM HAS SHINGLES”. So I was the pediatric leper. Good news is he should be ok. I just need to make sure he isn’t in contact with my spots which works well with nursing tanks because they cover them. He is too little to have the chickenpox vaccine so now we wait.

Now as for the rest of his health:

He is tracking objects, spitting up less and smiling all the time. He can roll tummy to back and his neck control is great. He does some tummy time but his main workout is standing up. He LOVES to stand.  I just hold his hands and he stands on my lap and looks around. He can still support his weight on his own. It is pretty impressive. He prefers to either lay flat on his back or stand. Inclines kinda piss him off. The bouncy seat gets no love and the swing is only for when he is asleep. 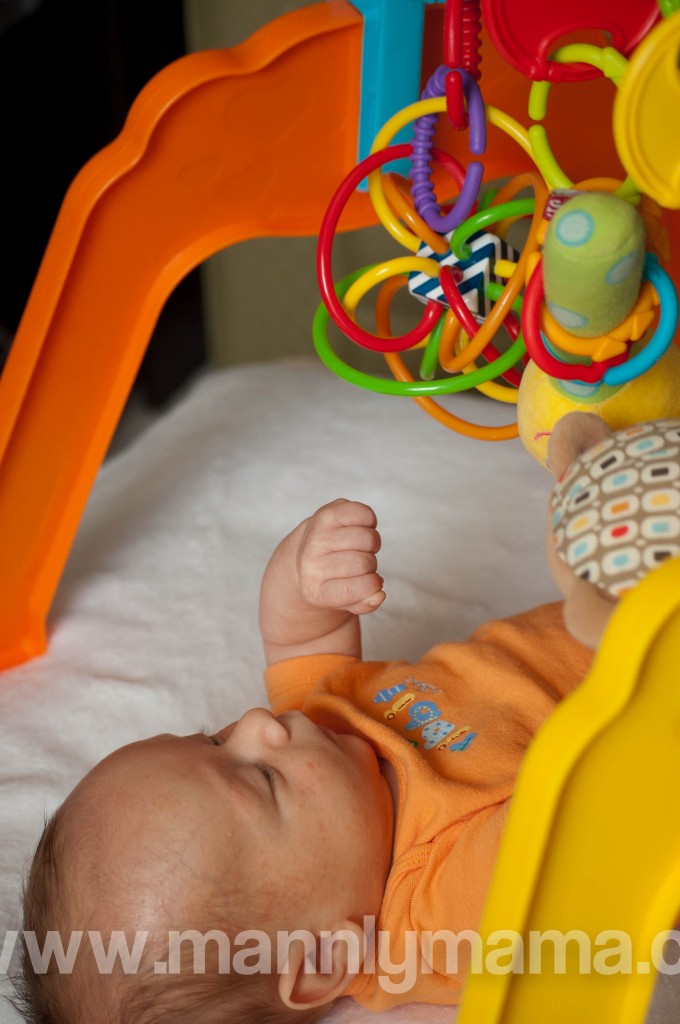 And that brings me to sleep…or lack thereof. Since about week 5, sleep is kinda crazy. His 1.5-2 hour naps were no more. His 5 min of fussing to sleep were gone. Screaming unless he was lulled to sleep via rocking or jiggling. Some days I gave up and Ergoed his ass to sleep most of the day. At night, he stopped going to bed or if he did, he slept for 20 minutes and awoke screaming only to be consoled by holding him or the swing. We bought a second swing and planned to have one on each floor. It was time to survive. We were barely getting a 2 hour stretch of sleep. Kevin was sleeping with him on his chest for part of the night on the couch just so I could get rest. It wasn’t a growth spurt because he wouldn’t eat. Pure madness. Since our “just survive” mantra, we have done a little better.  When he naps for 20 minutes, we quickly move him to the swing in his room and let him finish in that. At night, if he won’t go back down after 2 or 3 tries, swing again. We strap him in and put the video monitor on him. Then we all get some sleep. It isn’t perfect but at least we are surviving. Sleeping through the night is the farthest thing from my mind. 4 hours of uninterrupted sleep sounds like a dream and a 2 hour nap makes me want to fist bump everyone I see. Hopefully the older he gets, the better he gets because seriously…I am pretty sure this is why I have the damn shingles!

So there we are. 2 months in and both wondering how it went so fast and how it is going so slow at the same time. My theory, which I recall having with Landon, is they are mentally older trapped in an infant body. They are really frustrated when that hand won’t come to their mouth, that they can’t stand or sit on their own, etc. You can almost see it on his face when he gets aggravated. They are poster children for “it’s a phase”.

For a comparison, here is Landon’s 2 month checkup.

That Time I Got Motherfucking Shingles

Leave a Reply to Tracy @ The UnCoordinated Mommy Cancel reply