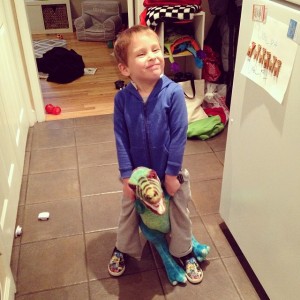 That title is a lie. “Training” implies that we did something when actually we did the opposite. Landon was easy to potty train. You can read all about that here. we waited until he was ready, slapped him in underoos and he did it. There were accidents here and there but it went so well, we were kind of baffled. No 3 days of house quarantine and tears over a potty and a basket of skittles. No refusing to poop. No REAL battle overall.

At that time, he wasn’t ready for night time. He slept so hard. We put him in nighttime pull ups and went about our way. My friends would comment on their kids giving up the pull up at night but it was clear we were not in the same boat. He wasn’t to the same level. He showed no interest on his own and his body wasn’t giving us much confidence. But there was more to it.

So until about a month ago, he would still wake with a pee soaked pull up. We started dropping “if you have a dry pull up in the morning, you can have yogurt raisins at breakfast” or something like that. It started working. Every few nights, there would be a little in there. He started asking to wear underwear to bed. We kept putting him off to see if we could get a solid week of dry pull ups. Then about 2 weeks ago, at 5am, he called out to be taken to the bathroom. Then last week we heard footsteps at about 9pm. JACKPOT.

But we were still lazy and didn’t want the chance of changing sheets in the night until…MOMMY FORGOT TO BUY MORE PULL UPS last night. Yup. Dumb me. So I said “just send him in underwear. WE have been telling him “soon”. I guess soon is now”. So he excitedly went to bed with his big boy underpants and I was on sheet duty.

I can officially say he made it all night with no accidents and is super proud of himself.

So basically what I am saying is…be lazy and procrastinate and it will pay off…errr something.

How Menn Do Photoshoots

11 thoughts on “The Story of Nighttime Potty Training”