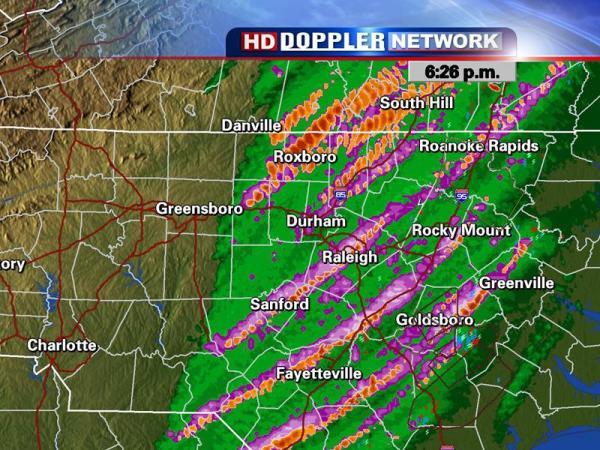 I am not going to tell you some grand story about the tornados yesterday. We missed it for the most part but it was still scary as hell.  We were watching on the tv, computer, Twitter, Facebook, etc.  On Facebook, I saw friends stuck in evacuation tunnels under arenas.  On Twitter, friends from around the triangle were tweeting what was going on where they were.  Welcome to the digital age people.  Hell we were watching WRAL and you could see the funnel coming.  Hats off to the coverage provided by the local news community.  It really can scare you when the weather guys tells everyone in the downtown office to get out immediately!

When I was getting tweets from The Weather Channel saying everyone in Raleigh should find a safe place, SAS called us and emailed us to find shelter, we headed to the bathroom.  Landon and I sat in the floor while dad was pacing the hall trying to get a radio station on the iPhone.  We never all get in there but it would have been a sight for 2 dogs(we are sitting), 2 adults and Landon(and his entourage of toys) to be crammed in a 1/2 bath. The main question was, which Apple products do you save?  Carbonite hasn’t finished uploading our computer yet!!

As for destruction, we are fine.  Nothing happened here.  We have insulation in our yard from somewhere and it was pretty calm for the most part here. Some lady posted on the WRAL facebook page that she has a construction sign in her yard in Wake Forest.  She called the company and they only do business in Sanford…over 60 miles away!  It is terrible.  I am going to clean out the closet tonight to have ready to make donations this week.  Hopefully SAS will have a drive or something.  Thoughts and prayers with everyone. I have heard terrible stories of families losing their houses and the aftermath is terrible.  The death toll keeps rising.  I feel guilty for doing anything today.  I washed the car…I felt guilty because I HAVE a car AND running water. I went to take pictures of a beautiful family…I felt guilty because some people have lost their family and all the photos they ever had.  I don’t even have the right words…maybe Fuck You Mother Nature.