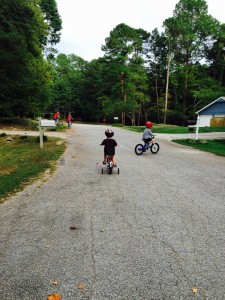 Learning to ride a “2 wheeler” has been looming over us for years. I recall playing sometime last year and Landon saying “well I can learn to ride a 2 wheeler when I am 6.” as he watched the little neighborhood girl whip around on her bike in the cul de sac. That longing statement of “I want to be big…just not yet” was inspiring and at the same time ominous. So when his brother clearly was too big for his tricycle and needed the next bike up, we told him “you aren’t getting training wheels” like true mean parents. I mean…he was turning 6, we recalled for him. Time to buck up, kiddo.

For weeks now when we play outside and I am the drill sergeant. “Let’s go practice your bike”. The caution-filled kid ::cough:: Kevin’s kid ::cough:: triple checked I was holding on. Goes 3 feet and immediately declares victory or defeat. Ready to return to the yard for safety. Rinse and repeat each day. Cue mom frustration out the wazoo.

Then last night as I am trying to answer a few more emails after carpool/homework/snack/circus wrangling, I hear “mom, I wanna practice”. I pretty much bolted up from my seat. He and his little brother strap on their Lighting McQueen helmets and we bop over to the cul de sac ready to roll. I get Landon started and almost immediately I realize Ollie is hanging a little too close to the main road for my comfort. In that split second I go back to help him get started, I then turn around…and Landon is perfection. Going all by himself down the street. No parent running along side. Ride or die, son. He slows and rolls into the grass putting his feet down. He did it! All by himself. The neighbor girl and her older brother both run out and start cheering. The joy on his face is something I want to remember forever. The pride was contagious. My face hurts from smiling.

After I posted this video on Facebook, my friend Tim posted this poem. What a punch to the gut but so true. I’m savoring every moment.

The older children pedal past
Stable as little gyros, spinning hard
To supper, bath, and bed, until at last
We also quit, silent and tired
Beside the darkening yard where trees
Now shadow up instead of down.
Their predictable lengths can only tease
Her as, head lowered, she walks her bike alone
Somewhere between her wanting to ride
And her certainty she will always fall.
Tomorrow, though I will run behind,
Arms out to catch her, she’ll tilt then balance wide
Of my reach, till distance makes her small,
Smaller, beyond the place I stop and know
That to teach her I had to follow
And when she learned I had to let her go.