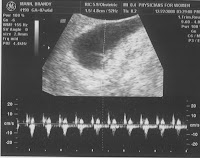 Well since no one is really paying attention to this blog right now, I think I am safe to announce we are officially on round 2! I found out I was pregnant on December 5th with a little joy mixed with a lot of panic laced in there. We decided not to tell anyone until we had our first appointment….just in case. Our appointment was set for Dec 22nd. I figured it was perfect so we could find out and then be able to share the good news on Christmas with the families.

So there I was, waiting close to 2 weeks with no reassurance. I did a few panic calls to Jan at healthcare to see if I could come have blood drawn for beta levels. We talked a good bit and she talked me out of it. Her reasoning was right. If we found they weren’t doubling, there was nothing we could do anyway. It was still nice to talk to her. She has been great over the past 8 months. She has dealt with my slight hypochondriacness. After one horrible cycle of uncertainty and weird stuff going on, she was just nice to take the 15 minute appointment to talk with me and provide me with enough reassurance that I could go on. So technically I told Jan before the appointment but that doesn’t really count. She was really excited though…she figured out my respective due date at the time and said she was putting it on her calendar :).

We had a lot going on at work so I was able to pass the time pretty quickly. On that Monday, I was giddy with excitement. Luckily, no one was at work that week so I didn’t have to hide it much….plus the whole work fiasco (see the Mann Clan for more details) was a distraction. So we arrived at the appointment and I got to see my favorite nurse Judy. She went through the motions with weight/BP/crazy blood draw. We then got to go talk to Dr. Seidel. I just love him :). When we walk up he asked if we wanted to go see first or talk. I figured it would still be there if we waited. We went through the obligatory do/don’ts but he knew I remembered for before so it was really quick. We kidded around and everything. He asked how I was feeling and I said I was slightly nasous but not throwing up or anything. He said “very good”. Oddly enough, I share that sentament. 🙂 More on that later. Anyway, we bebopped in, dropped the pants and voila! I turned away from the screen until he said something positive. I don’t know why but it just made me more comfortable. He said everything looks great and healthy. I was measuring behind 1 week from their old school prediction but I expected this because I have a 35 day cycle and not a 28 like they base it off of. So 6w6d. We passed the point of Pumpkin…that was a big sigh of relief. Then he zoomed in to see the little heartbeat flicker. Now remember we saw this(or thought we did) before. Kevin said this was much more noticable. He zoomed in some more and turned the sound on and we got to hear the swoosh swoosh :). It showed the frequency and everything right on the screen. He didn’t do that before. So that made me more hopeful. He said you can’t get an exact heartbeat count at that early but it was about 135-140 he guessed by what he could get with the machine. Right on target! I left super happy with 3 pictures in hand. When we got home, Kevin said that heartbeat was just pounding away. It made me think of the name Thumper. Gender neutral and cute. So there…Thumper it is.

Our next appointment is set for Jan. 21st. I will be 11w1d. I have decided that if it goes well, I am ready to tell other people. It is technically a little earlier than is recommended but I won’t have another appointment before 12 weeks anyway….so nothing changes for me.

I am going to cut the post off now. I will post more about telling people and symptoms later.