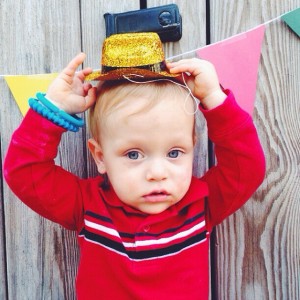 2nd child moment: When your daycare emails you that you need updated vaccination records and when you call the pediatrician, they tell you you haven’t scheduled his 15 month appointment. Oh. Whoops. That’s a thing?

The 2nd child round of well visits are almost comical. With Landon? I kept a list of questions to ask. Now? I forget about them all together. She asked if I had questions and I just asked for steroid cream for his cheeks. Welp!

Well good news is he is doing just fine. I haven’t completely failed as a parent. I figured I would use this post to note all the things he is doing recently. Sorry for the lack of posting…crazy times, y’all! 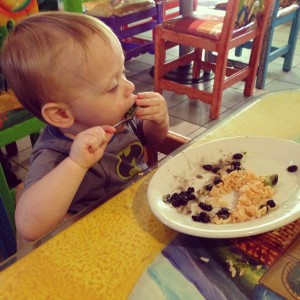 Like most toddlers, he is different every meal. As the pediatrician noted, they usually have 1 “good” meal a day. For one, he loves to use his own utensils. I took both boys out solo this past weekend and he ate with his spoon like a big boy. Avocado, rice, black beans and cheese. He tries so hard to do it himself. Even tonight he wanted to scoop my collard greens. Surely, I thought, he would hate it. Nope. Kept wanting more. KIDS ARE WEIRD.

His favorite things are usually sweet or what his brother has. Fruit is still a constant want and he drinks milk like crazy. The minute his feet hit the floor in the morning, he is climbing the fridge moaning “maaaaaaa” and signing for milk.

He still sleeps through the night. I have found with him, I am more confident in checking in on him and knowing if he gets upset, I can calm him back down without confusion. He knows the routine so well. If I pick him up and sing? He just lays his head down and snuggles.

He is down to 1 nap with sometimes a car cat nap on the weekends on our commute to wherever. He is very good at knowing when he is tired. You can say “Ollie? Do you want to go night night?” and he will take off for his room. He giggles when he sees his sleep sack and books.

We leave pacis in the crib with him for “toys” and teething. We had nothing in his crib and we were finding he would wake up and get into mischief, like pulling the curtains off the wall. We started putting more things in the crib sooner than Landon. Sometimes he just has something he wants to take with him. Mostly just a few stuffed animals and a book or 2. One morning i caught him where he had moved the curtain to get a beam of light and was sitting in it flipping through his book. It was so precious.

Ollie is more of a grunt and screamer. He has a few words

He signs mik and all done. He can identify his feet, nose, belly and diaper. He has learned from school how to bring his socks and shoes to put them on. 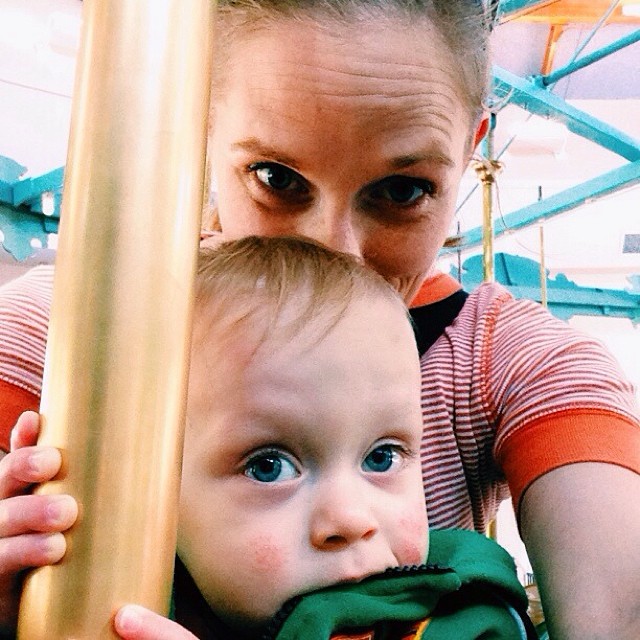 He runs. He falls. He leaps on and off of things. He is giving his daddy gray hairs. He is my child *devilish grin*

He is outpacing his older brother developmentally.  I suspect most is just growing up faster with someone bigger to watch. He is very independent. I think this is also a product of his montessori environment at school. The consistency of rules really seems to do wonders for him. I found saying “Oliver. That is not your work. Walk away.” gets a much better reaction than just saying “no”. “No” will get you a plop on his butt and big cry. The other gets a noticeable pause and he usually turns around and moves on. He is doing pretty well with sharing for a little toddler. He is very aware of MINE from school and standing his ground. Yay?

He really loves a routine. 2 days into the new house and he gets down from the table and goes straight to the bathroom. I go in and he is standing on the stool to wash his hands. We had never washed his hands in that bathroom before. O_O When he sees me coming in the afternoon at school, he takes off for his coat and hands it to me to put on. They work on this a lot at daycare with putting the shoes and socks away at nap. Some classes do colors for the kids but ours does an animal. So he has a sheep on his coat hook, place at the table and a bin for his socks and shoes. They know to put things at their spot. He seems to thrive on it. He likes to put things away almost to a fault and hates doors or drawers open.

So our “little” boy is growing up a little too fast. From trust falling onto his brother to chasing the dog anywhere for a tennis ball, we have our hands full of Beans.

Cherish Your Moments with BooksTo.Me {Review}