18 months. Jeepers. I realize I am little late but to my credit, we had his appointment on the 10th for some weird ass reason and I just forgot. We are delaying his Hep A shot until his 2 year visit so it was an easy in and out.

He was in a wonderful mood for the appointment even chasing the nurse to the room giggling. 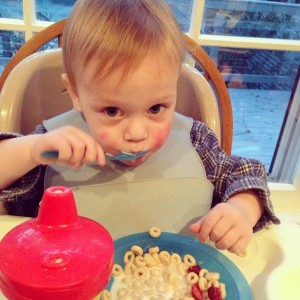 Welp, everyones curses that my second child would be difficult in the food department won the lottery. He is stubborn as a damn mule (or his mother, depending on who you ask). One day he likes something, the next he doesn’t. I am still living by the “one good meal a day” mantra. He doesn’t seem to be picky…just stubborn. He doesn’t want help but won’t attempt most things on his plate. It’s maddening but whatever. He is getting enough to grow and sleep, so be it.

We are really sticking to consistent rules with him now. He understands us. There is no special treat and nothing else offered until he finished dinner. I rarely give him something different and that is usually just a slight difference like steamed veggies over salad.

He does feed himself for the most part. He is perfecting the fork and loves stabbing food.

He still loves milk more than anything. He is at the fridge when we come downstairs in the morning. Only difference now is he says “peas” and “tank oo”. TAKE ALL THE MILK, YOU CUTE WHINEY MESS! 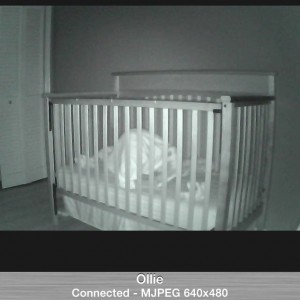 Minus random cries from what we think are bad dreams, he sleeps like a champ. He goes to bed around 7:15-7:30pm and sleeping until 6:30-7am. He wakes in the AM and usually “reads” in bed. We leave him most nights with about 3-4 board books. Some nights he plays and reads for 30 minutes or more before laying down. It’s fun to watch.

He still has pacis in the crib to chew. His teeth seem to be bothering him lately.

He naps around 1pm with sometimes a car cat nap in the AMs on weekends. He is a pretty good napper. I really can’t complain.

We are working to get him to talk more over just grunting and screaming. Lately he has shown us he knows a lot more.

He is clumsy as all get out. He runs into walls. He trust falls on to you. He falls on his face EVERY day. He is covered in bruises between that and wrestling his brother who he trust falls on as well. #boys 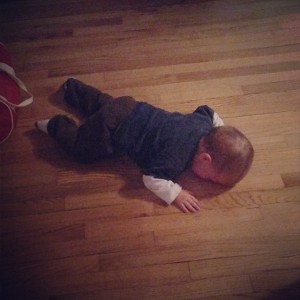 He knows what he wants. He will pull every book off the shelf and come to you to read. He can clean them up too!

He seems to like trains {thank heavens} and likes to play “race planes” in the evening with brother and Daddy. They each get a plane and run all around downstairs making plane noises.

When given paper and his box of crayons, he would rather just try and put the crayons back in the box of coloring. Nerd.

He can be won over by yogurt raisins.

His favorite song is “When Can I See You Again?” by Owl City. Runner ups include “I Can Only Imagine” by David Guetta and “Happy” by Pharrell where he notes it is from Despicable Me and makes minion sounds “put put?”

He is extremely loyal to HIS teachers and can spider monkey us at drop off like no other if they aren’t around. I keep thinking it will get easier but it never does. Le sigh. 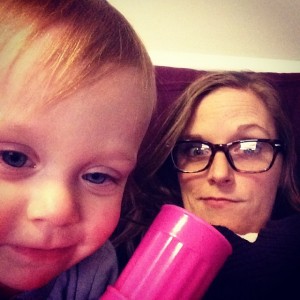 He is full toddler. MINE and throwing tantrums…it’s all there. He is spunky and we love him. He makes us laugh and want to pull our hair out…so I’d say he is pretty par for the course.