Let’s just put it this way, Ollie hasn’t been the role model for eating. He has scoffed at my turkey kabobs like his brother loved them. He can tell me NO in the blink of an eye because the food isn’t what he is used to. He is “picky” I guess but I call bullshit. It can be a food I know he likes, and he just refuses. For months, we dealt with this but I did one thing.

I Didn’t Give In

Here is where I dig my heels in on parenting. I could have given up and let that kid eat black beans and fruit for every damn meal but I didn’t. He was served what we were having (with slight modifications for littles) and that was it. He got nothing else. Some nights he refused to eat anything but a spoonful of ketchup and orange slices. I would give him his milk (after dinner…learned my lesson there) and that was it. And ya know what? He never woke up hungry. Ever.

I think we mothers internalize that tid bit and I’m not saying they can’t, but mine didn’t. Did he eat more snack that day? Maybe. Was he really just not hungry? Totally possible. Just being an asshole? Strong likelihood…he is MY kid after all. But I didn’t want to stop offering variety no matter what he decided that day.

Then One Day The Skies Opened

A few weeks ago, we tried one of the many “tricks” to get Ollie to eat. They never work. No promise of treats or whatever would make him eat. STUBBORN, I TELL YOU. But this time? It worked. He ate his bites for “snacks”. It seemed the word “snack” got into that toddler logic. He loves snacks! He ate it up. And not even a bite for bite ratio. I swear a light shined into that kitchen.

Since then, most meals have been so much easier. We don’t even have to do this for every meal but especially ones where something is new, we implore the “snacks” method. Stuffed zucchini: demolished. New burrito: sure thing! All we have to do is have a “snack”.

So What Are These Snacks You Speak Of? 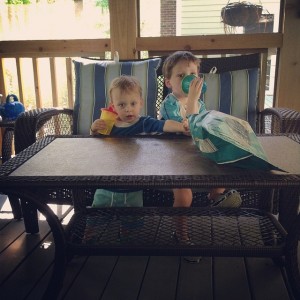 Snacks are actually the genius part of this whole thing. They are items I would just normally serve. His favorites are raisins or bits of fruit leather. It has also worked with frozen blueberries (one of his favorite foods on the planet).  All about selling it but it totally works. He now will eat bites just by saying it. “Ollie you need to eat more chicken before you can have snack”. That fork goes to town. He usually doesn’t balk back at me and when he does, he is usually near the end of the meal.

I suggest making this something deceivingly healthy but a favorite. Fruit seems to be a good option for most here. Set the bar low so if you have to up the ante one meal, it isn’t “a whole pie” type level. I also suggest something you can throw in a bag when you are out to eat. The fruit leather bits from target are great because they are in little pouches I can keep in a purse. Same for a little box of raisins. I try to avoid these single serving type things for the most part but it comes in handy for that dinner on the go.

Now I know the word “bribe” has a negative connotation to it so let’s swap this thinking. Let’s call them “incentives”.  I believe a bribe is something used to reward a negative behavior but to get them to be quiet. I try and avoid these. I believe incentive is better because I am rewarding a desired behavior. Like “if you do all your chores this week, you get $5” isn’t seen as bribe, I don’t think getting them to eat with promise of a desired outcome is either. So there…I’m decreeing it. Boom.

So what are your “incentives” for dinner times? Does it work?

NOTE: Because I have been educated to different types of issues around feeding, I knew the signs to watch for a more serious issue with him. He didn’t seem to have a sensory, texture or a gastrointestinal issue, so I went with my gut that this was pure stubbornness.  If you think your child isn’t eating because of another factor, I highly recommend you go to your doctor to discuss. It’s a tricky process and I encourage you to seek help.

One thought on “Toddler Dinners: When The Bribes Start Working”