So guess what? All your rain dances for me to get a difficult toddler in the feeding department this time around worked. Ollie is…difficult. The drama changes nightly. It isn’t as much a frustration of what he will and won’t eat as much as him just completing a meal without a meltdown. He isn’t “picky” on taste. Because I can trick him and get him to eat something and he never hesitates. Sometimes rougher textures aren’t his thing which is usually like something fried or toasted. Fair enough.

But Ollie has his own sets of issues, just like any other kid. So here are his for comparison:

When we switched Landon to whole milk and a cup, he was a little slow. He would drink just fine but just not a lot. I remember our AHA moment was keeping a sippy of milk at school all day and then giving it to him on the way home. He would get 8 oz in one swoop. We were so proud of ourselves. Well I can say ole’ Ollie Beans does not have this problem. We actually have to regulate it. The minute his feet hit the ground in the morning, he is moaning at the fridge signing milk. I give him 8 oz while I fix breakfast. That ish is gone in 2 minutes max. Then sometimes I give him 4 more with breakfast. I don’t have the calculations from daycare but the same thing happens at night. I actually started giving him watered down juice as an alternate (something I didn’t do with Landon until at least 2). I just need him to get more calories from food. He is fine on weight and such but I just don’t want him to fill up. It is a delicate balance. 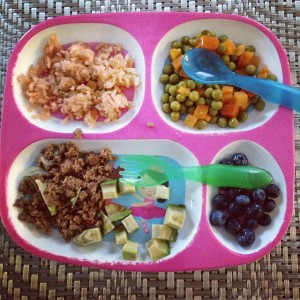 One night he screamed and screamed while we tried to let him pick it up with his hands, tried spooning it, anything…but he wasn’t having it. Didn’t matter what it was. SCREAMS. Finally in a burst of anger, I just gave him the spoon. Then he moaned towards the plate out of reach. Kevin put some food on the spoon and he ate it just fine. He wanted to do it. So now my dilemma is keeping Mr. Independent happy and Kevin not going into a OCD anxiety attack. Last night he tried so hard to eat his rice with his spoon. A couple of fails launched rice on to the floor (you’re welcome, Jack) but he was going to do it, dammit. This kid, y’all. It is scary.

The Ole Bait and Switch

Like I said above, it often isn’t that he is picky over the food…he is just stubborn. Won’t open his mouth to even try something. But we are smart, wee one. We know how to get you to open. His favorite game is “BAH” where he and Landon will say this back and forth with shit eating grins on their faces. Exhibit A:

So we get him going and I put the spoon in there. He eats it just fine. See? Not taste. Just stubborn.

Put the ground beef on the spoon and put a piece of pineapple on top. Let the bread soak in the watermelon juice. SMOKE AND MIRRORS, PEOPLE.

Yeah so we aren’t without problems up in here but we learn to deal. He is perfectly healthy and eats just fine at school. Whatever.

Follow along with my snark filled dinners with the hashtag #toddlerdinners and the ever popular #justFuckingEat on really special nights when they gang up on us with ridiculousness.

We’re having that for dinner?: A Guest Post by Alicia