Project 1: Picture frame wall to learn friends and family faces. It was tough picking pictures. We have a lot of family and friends…but I had to make some decisions. I obviously was going to do parents, grandparents, and great grandparents. Past that point, I tried to pick people he will most likely see a lot of. Also since Kevin and I are only children, he will have no aunts or uncles…so we have honorary ones. Michele is basically like my sister…so she got the one non family placement. Sarah and Rebecca grew up like sisters to Kevin…so they are Aunts. Aly is the “junior godmother”/Aunt along with her sister Rachel. Brooke and Blaire are the other cousins in town, so they got on the list. Then Kevin’s uncles and aunts are always at the river and around town…so they got the last places. It also was determined if I had or could get a nice picture of the people/person 🙂 Also Jack and Scout are always important! Now who will get peed on first 🙂

To recreate this, I bought craft frames at Michael’s for $1 a piece. Then I painted them and hung them…voila! 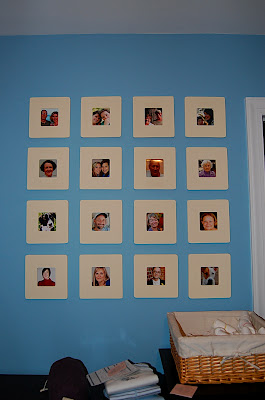 Project 2: Now I mentioned this one before. I started with the idea for a mural…but quite a few things threw that out. A) I didn’t have a projector to make it big enough on the wall because the room isn’t very long. B) I can’t paint and would have to get someone to do it for me. C) If we move, I would have lost it all. D) Laziness. Anyway, talking with my designer friends at work, I decided to do large prints. I could take them with me, I could do all the work myself, and then have pictures frames to refill later when we change his room. So I decided to mimic the pattern on the bedding with making his initials. Now we aren’t letting you see the first one 🙂 So I photoshopped it out for now! I also learned a lot about letter placement and photoshop on my journey! 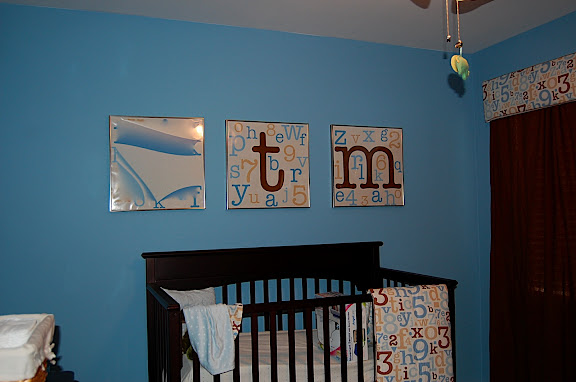 Landon’s Book of the Week – Monsterpops!

One thought on “Art Projects!”