Let’s get something straight.  Just cuz I take photos of the food doesn’t mean it goes well.  I do that BEFORE. We still have the HORRIBLE meltdown nights.  This week for instance.  See Tuesday? I made homemade pizza. It was awesome. Pineapple and bacon people! Now see Landon doesn’t like pizza.  I know.  WEIRDO! So being the accommodating mom I am, I gave him some turkey pepperoni and cheese instead.  Well, I pretty much gave him poison in his eyes.  He ate his mangoes and some salad and then the screaming started. He wouldn’t even try the pepperoni. NO NO NO! There were tears and twisting in the high chair. Screams of “my belly” where he struggled against it. It was quite annoying (but the reason we are still in a high chair).  All we wanted was for him to try it.  All he had to do. Terrorists, we are.

That is our rule: you have to try it. If you try it and don’t like it…that’s fine. So we push. Maybe we shouldn’t but we do. It is rare. We can usually ploy him into it. And USUALLY he likes it. Like the spinach artichoke pasta the other week. Or the first time he had chicken sausage. You tell him there will be no special treat unless he tries. He tries and then exclaims “i like it!”. This is the reason I push. Landon is MY son on a lot of levels. Stubborn, hyper, daredevil, always hot…so I also applied to food. There isn’t much I won’t eat. So I figure he isn’t a picky eater and I push new foods.

If he doesn’t like something, that’s fine. I might put it on his plate another day with more things he does like. I also don’t push new foods on fussy evenings. I am not dumb. It just depends. I accept he won’t like some things but I also don’t want to be making special meals for him until he is in college.

So how do you deal with food challenges? Tantrums at the table? Do you think I am terrible for pushing new things on him?
Note I only did 4 days on here. I am on vacation and my photoshop is not with me. 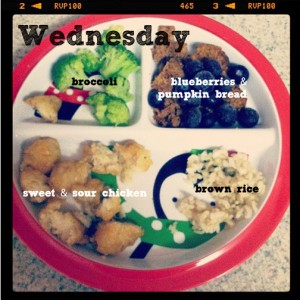 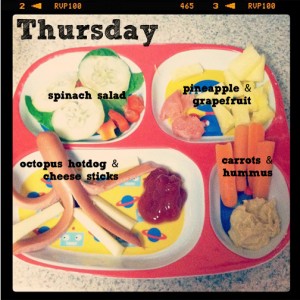 Toddler Dinners is my weekly series of posts to explore the world of feeding munchkins. Each Monday I will post our previous week’s meals and a rating on how they went as well as discuss numerous issues we all face. Find out more here.

Mouth of the South

2 thoughts on “Toddler Dinners: When shit hits the fan”