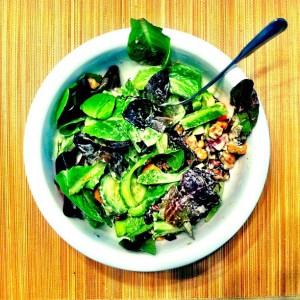 If you have been following me on Twitter and Facebook lately, you will have noticed my binge on Netflix documentaries about food. With 3 sick days between me and Ollie, I overloaded on them and with that, took a lot away to think about. I could write for days about my rants and raves but I am trying to be reasonable here and take it with a grain of salt. I know documentaries can be bias but they also can just make you realize some common sense things. I mean no one can argue “eating fruits and vegetables is a TERRIBLE idea”.That is the crazy thing about all this. We are all highly intelligent beings and know what food is terrible for us…yet we keep doing it. We are addicted because it is all engineered to make us come back for more. You have to hand it to scientists, they are doing their jobs pretty well. We CRAVE junk. We build culture and tradition around food. It is a part of who we are. See? I could harp about THEM for days but that isn’t going to help anything change so I am trying to step back and take away a few main things to move forward. 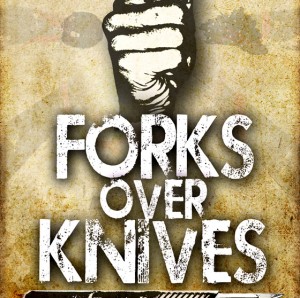 First off, here are the films/talks I watched (all on Netflix streaming).

Food Inc. (I actually watched this one a long time ago)

Forks Over Knives: The Engine 2 Diet

Step 1: Stop Bitching About How Much Food Costs

Films behind it: All of em but definitely Food Inc and Vegucated.

Every time I have tried to go all hippy and natural, I start getting gun shy because of how much food costs. We all call Whole Foods “Whole Paycheck” for a reason. Organic, natural food ain’t cheap. And while it’s unfortunate that this is the norm, I need to stop letting this dissuade me. My family makes more than enough money. We aren’t living paycheck to paycheck and I can easily drop $75 at Target on NOTHING. I need to stop whining about $3 organic pears. I need to feed my family the healthiest stuff I can. In the long run, I am saving them from more doctor’s visits ($), prescriptions ($$) and bigger pants ($$$).

I also need to think of it in trade offs. If I buy the organic spinach, I don’t buy a case of soda. Win Win. Also eating less meat (see below) will cost less.

Films behind it: Forks Over Knives, Food Inc. and Vegucated.

I’m not going vegan….or vegetarian for that matter but I want to cut back. As for meat, we don’t NEED it like most people think. To stand up for my vegetarian friend Jen, she is one of the most fit and healthiest people I know with 2 veggie kids who eat more variety than any other kids I have met. They are healthy, active boys. They don’t NEED meat for protein. That is clear. But if people aren’t open to other proteins and healthy fats, they might be a hard one to change. But I took away that people can be healthy and just fine on plant based proteins if they eat the variety of foods nature gives us.

This also isn’t an animal rights thing even though these movies were kind of graphic in that regard. My decision is based on hormones and GMOs. We weren’t made to ingest these chemicals…no matter what any other study has said otherwise. I plan to buy as much local farm raised meat as possible. That, along with eating a spectrum of organic healthy fruits and vegetables, is never a bad thing and we need to do more.

Next up, dairy. I already knew dairy was hard on your digestive system. I mean this is the most common protein to upset an infant’s stomach…gotta mean something right? Also the data in some of the movies seemed pretty damning of dairy. Fortunately, I was already ahead of the game here. I went almost completely dairy free for 6 months with Ollie. The trace amounts I had were either in baked goods or bits of cheese that I didn’t sort out of premade salads. I switched to almond milk and coconut milk ice cream for a treat. And you know what? It wasn’t too bad. It sucked at first trying to not have lattes (I avoided soy for a bit too) and it seemed like cheese was EVERYWHERE. Now? I don’t really want it. I got a kid’s size Goodberry’s to taste the other night. I had 3 bites and I couldn’t tolerate it. I didn’t get sick, just did nothing for me. My downfall has been mostly soft cheeses. I love blue, feta and goat cheese. So I am going to keep it up. Along with this, I am going to rotate different types of milk with Landon. He doesn’t seem to be attached to cow’s milk so I might as well keep him accustomed to different things. I am not damning dairy but I just want to take away our dependence on it as much.

With all that, our family goal is to have 2 vegetarian meals a week. Not crazy…doable. I also plan to eat mostly only vegetarian lunches. Lunches are pretty easy since work has awesome salad bars and veggie options. Even vegan! So a step in the right direction for our health. I’ll take it.

Films behind it: Hungry for Change and the TED talks 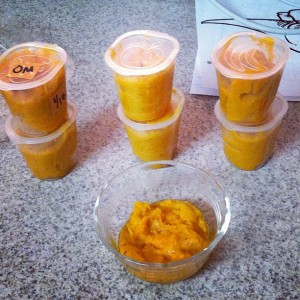 All these things that I want to do (and can do) with my family is just 1 step. Childhood obesity makes my stomach churn.  4 year olds have their cholesterol tested now. THAT IS RIDICULOUS! But sadly it isn’t and that is depressing. Kids have no idea where food comes from. School doesn’t teach it. School lunch is fucking terrible…and not the terrible like “ew it tastes gross” but “ew it tastes great because it is full of shit engineered for just that”. Sugar in the milk. Grease in the food. It sickens me. And while yes, I can vow to pack their lunches until college, my boys are just 2 in a world of “underfed” kids. I am here to monitor this.  What about the huge number of kids on free and reduced school lunch? The kids who can’t find a fresh vegetable in their neighborhood market so dinner is Doritos and mountain dew. Then my coworker told me a story of working at a medical facility in college where oral surgeons had to remove CHILDREN’S TEETH because their parents had given them soda in baby bottles. AHHHHHHHHHH. Where is their advocate?

So my plan is to make sure my boys know about food. I know there will be battles and control issues but I will present them with education and healthy food and hope it sticks. I have already started by taking Landon grocery shopping more. We talk about all the produce and talk about healthy foods (daycare already did this with them SCORE). He knows candy and sweets are “treats”. He RARELY has fast food and really only likes fries. He was excited at Whole Foods to get dinosaur leaves (kale), kiwis, black beans and even picked plums for Ollie. We then got some grass-fed hippy ground beef which he deemed “worms” and was all the rage.

This also all comes at a good time because making all of Ollie’s food keeps fresh fruits and veggies around the house. As with Landon, I am trying to introduce as many foods as I can. Yeah, we will hit the inevitable control battles later but I have to do what I do for now. Make sure he gets nutrients from all kinds of plants and legumes. He really is a healthy little baby.

Educate my kids is all I can do right now. Once they are in real school, I can be a Rosie the Riveter of the cafeteria. For now, this is what I have.

Films behind it: All of them but mostly Forks Over Knives and Sick Fat and Nearly Dead 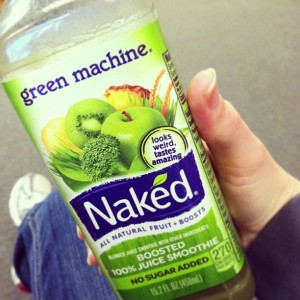 We need to just overload on fruits and veggies. At dinner, they should be half or more of the plate (note the kids always are anyway…WIN). More salads. More smoothies. More nutrient rich juice. I kind of want a juicer but I don’t want it taking up so much space. For now, I am buying giants liters of Naked Green Machine from BJs and hoping that helps. We are also going to look into the local coop again. The farmer’s markets will be weekend trips soon (the ones close to use start up in the spring). Make ourselves healthier through nature.

Doing my 2 month stint gluten free opened my eyes to this. I couldn’t eat A LOT of processed foods. No granola bar in a hurry in the AM. No pasta. No quick sandwiches. It was tough but I learned a lot. Once again, I learned to try new things. Alternate grains. Different pasta types (quinoa, rice). I believe this is why people are jumping on gluten free as a “diet”. You are cutting out so much junk just to follow that rule. I don’t think people all have forms of celiac’s disease…they just know they start feeling better .My theory is they are actually eating what their body WANTS and not just processed shit. So my plan is to think in more whole food terms. There will still be some processed stuff. I’m human and I have children but I am finding I am leaning away from the Nutrigrain bar for a snack and more to the banana or corn tortilla chips and salsa. I think just little changes like that will help rid my body of so many ingredients that I can’t read.

I am also getting away from as much added sugar wherever I can. This includes the corn syrup in EVERYTHING. I can’t say I will be great at it but I will give it my best effort. I am already shying away from sodas and using Stevia in the Raw in my coffee. Baby steps.

So overall, I have always felt I have had a pretty good immune system and I attribute it to a nutrient rich diet. I want to keep off daily medications for as long as I can. I think diet and fitness is a way to better yourself from the inside out. I want to keep my family as healthy as I can and give them the tools to make good choices in the future and maybe educate someone else. Call me a hippy, whatever. I’m doing what I can.

What are your thoughts on the “food/obesity” epidemic in the US?

22 thoughts on “Food For Thought”