I have overused the word toddler. I let it still slip in conversations still but y’all, Landon is a preschooler.

At the end of the month, he moves to pre K at daycare. They operate like a kindergarten class. They learn to read. They do science experiments. They are ::gulp:: kids. Not babies. Not toddlers.

We had a meeting last month to talk about this transition. They assured us he was completely ready for it. Academically he is completely ready. He can write his name (first and last), identify all the letters, knows a lot of beginning letters to things, all his numbers, etc. He loves to “read” by memorization or context clues on the page. He cherishes the Clone Wars books Laura gave him like secret treasures and can recite them already. He has even started wanting to read his books to Ollie. My heart melts every time.

This month, his current preschool teachers are starting to get him ready to move. He is fine with new rooms and teachers but the environment and work is going to be the big change so they have started giving him worksheets to do over the normal academia they do. Number sense, matching upper and lower case letters, and matching. I have been amazed at how they give him a new sheet in the morning and show him the gist and he blasts through it in less than a minute. But then yesterday we got an email bright and early from his teacher.

“We have been doing extra work with him daily, focusing on more writing development. Today, I gave Landon sight words to write and he did them all, alone! I helped him with the S. He even used the words in sentences. We are so proud of how much he has grown in his short time with P6!” 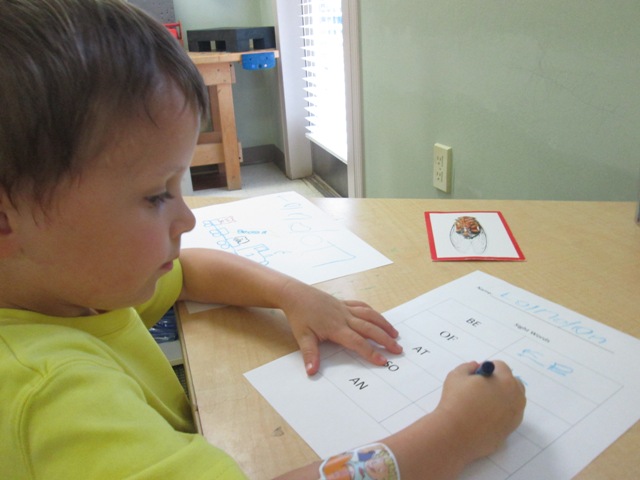 He wrote every word with no help. I am….amazed. Our biggest hurdle is usually just convincing him he can…then our jaws usually drop. It happened with swimming on vacation. After the initial uneasy whining, we pushed him and he did great. LOVED it. Never wanted to get out and pushed his own boundaries. The waterslide was “too hard” and wanted us to help him but then by Saturday afternoon, he  was climbing up 10 feet alone and sliding down without a care in the world. He is growing up so fast and it is so much fun to watch.

As for the inevitable question of “are you putting him in Kindergarten next fall?”, we don’t know yet. We are setting him up so that he can if we decide to. Academically, he will be fine. All his teachers and others have watched him and said he is right on track for that but the question will be maturity. Add in the concept of all these people red shirting their kids and it gets really complicated…fast. Especially for boys. So my goal for the next 6 months is gauging the kind of kid he is. Does he do better being the older kid and helping the little ones or does he get bored? Does he need to emulate older kids to get him out of that initial “I can’t do it” mentality. Parenting is hard, yo.

9 thoughts on “We have a preschooler”