Ok future mommies to be. Here is my list of things I would recommend you get if you don’t have: 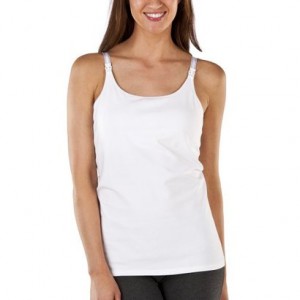 1. Nursing tank tops: Buy them now and I recommend taking them to the hospital too. I got mine at Target. I have 4 in rotation that I wear to bed. They are easy to snap one handed and they keep your belly warm in the middle of the night . I can see buying more to wear under things in the winter for that very reason. I recommend for the hospital because those gowns SUCK for more than 1 reason. I would take one of these and like an old cotton skirt you don’t mind ruining. 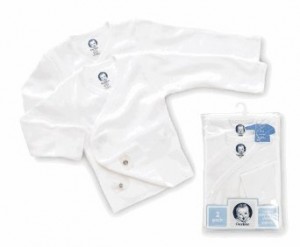 2. Snap shirts – We got a set just like this as a gift in newborn size. It was by far our favorite article in the early weeks. When they are so little and so new, you HATE pulling stuff over their head. These shirts are great. They are also great in the night when he spits up on it. It is much easier to change him without him getting fussy. I bought the girl set for Jamie and Scott because I LOVED it so much. I still love the monkey pants. He now has monkey pants and alien pants and bear pants. They are super functional for a kicker who has a vendetta against socks. Also the daycare staff just love them! Carter’s also makes just plain white ones in a pack. We used those for night time and the cute ones for going out. 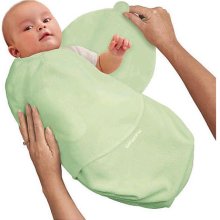 3. Kiddopotamus swaddles – First off, I don’t see how new babies sleep without swaddles. Watching him try was just torture. His little arms would just fly up…poor thing. Or sometimes they will just slowy rise. This would happen in the car a lot and I called them “zombie arms”. Well in the hospital they swaddle with blankets…and you can do it…but it is hard. Especially since they are all scrunched up and you don’t want to get it too tight…but you gotta or those little arms will be out in 2 seconds. That is where these bad boys come in. Joey and Joelle had shown us with Leah…so we already had 3 waiting at home and I bought a 4th for the rotation because one night he went through 3 with spit up (note they are like $10…cheap in terms of baby crap). You could wrap up the burrito and he would never get out. Also no worry of a blanket getting lose and going over his face. This is also nice when nursing because those little hands like to reach around …but not when swaddled! I also found it good to put him in it, carry him in my arms and wedge the paci in his mouth with my arm. I would then walk on the treadmill at 2 mph and he would be out like a light. That wore off after about 8 weeks but it was golden until then. I would even put him in it and put him in the swing to ensure a good nap sometimes. Without it, he would be all zombie armed in no time and up.

4. Nalgene OTG Everyday bottle – This may seem random but I love these. I have 3 of them. I got one for work when I was pregnant to make sure I drank enough and they were BPA free. I then got one for the river and then another to leave at home. Now you may be saying “but it is just a bottle” but you would be wrong. See that little ring? That means you can carry it on your finger…while carrying a baby…and a diaper bag…and whatever else. Most times I am carrying it with the boppy and the boy to nurse. I never thought it would be so crucial to have around but it is….so get one.

5. Angelcare Baby Monitor – This monitor is great. I actually wanted a video one..but they were pretty expensive and no one got it for us off the registry :). This monitor was sold on the bulletin board at work for $50. Heck you can’t get a good regular monitor for that price. This monitor isn’t just for noise…it also detects movement. The SLIGHTEST of movements….like baby breathing movements. Now I know you are skeptical…and I was too. But we tested it out when LT was maybe 2 weeks old one afternoon for a nap…and it works! If it senses no movement for 20 seconds..you get a warning beep and at 30 seconds it goes off. We have had 3 false alarms in the past 10 weeks. One was last night when we think he got too far over from the center of the crib and it didn’t read him well. Anyway….it is a peace of mind thing. And ESPECIALLY when you have a 10 week old that can roll over onto his tummy. You know…the EVIL position. Well highly recommend…nuff said.

6. A cradle swing – I won’t specify a brand or anything. If I had to do it over, I would want one with an AC adapter. Ours EATS batteries but I got it as a gift so I am grateful! This was my saving grace on some days. I could put him in this and at least be able to make myself lunch and sometimes he would nap in it. Early on, he could sleep for hours in it. The last 5 weeks of so though…we get about a 30 minute nap tops. Not sure why but whatever. He now is old enough to see the fish mobile and lights. So if he is a little fussy and overstimulated, I get him soothed down by walking for a few minutes and then he can swing and stare at the fish. I am sure it will come in more handy when we can put the tray on and let him play with stuff.

7. Cloth diapers – Stacks and stacks of them. We have the full absorbency ones and then the little thin ones. We have them EVERYWHERE. For a baby who spit up A LOT, you need then everywhere…in mass quantities. Those cutesie burp clothes are a joke….they can’t with stand the Landon test. We also learned to use the thicker ones under him on changing tables so you would just throw that in the wash if it got dirty instead of washing a whole cover. After the baby stage is over, I will have cleaning clothes for YEARS!

8. Baby carrier – Baby Bjorn, Moby wrap, sling…whatever…you need one…or multiples. The Baby Bjorn has allowed me to eat lunch with friends, get chores done, and save a fussy stroller ride. Any carrier should work…but know your options. I have a really nice sling, but my boy doesn’t like to be carried “like a baby”. So cradling is out. He likes to be upright or on his tummy. He can now face out and likes looking around. This was also another napping savior. If all else failed, I could strap him in and go for a walk. He was always happy being close and I could wedge the paci between him and my boobs….glorious. At restaurants I could put a burp cloth over his head and eat. I also carry it in the bottom of the stroller so when he starts to scream murder to get out, I have an option before someone calls social services on me. I see the Moby coming in handier now…it can readjust to carry him on my hip or back since he has better neck control.

9. White noise machine – Though you can make one if you need to. We have one for his nursery that is fancy. It does white noise, music, or can hook to an iPod. It is also a night light. But I had to get crafty at the river and just took the alarm clock and put it on static. Our boy likes loud sounds. So much so that one morning he was crying and I was carrying him around and just yelled really loud out of frustration and he fell asleep. Weird I know.

10. iTunes track of a vacuum cleaner – it cost 99 cents and it is worth 20 times more. We use it constantly. Car ….house…you name it. It can put him in a trance.

11. DVR – For many reasons, this is awesome. During maternity leave I would record lots of things to play in the background. Then we had to DVR all our shows at night because we spent them rocking or sleeping. We still use it because we are so backed up on stuff we haven’t watched yet.

12. XM/SIRIUS – When you have a sleeping baby in the car, the last thing you want is a loud ass commercial break from some car dealer. Also the dance/techno station keeps a steady beat always…even during the DJ talking. So it is like a nice clubbing lullaby.

13. E-reader – now I haven’t used this much recently but also on leave, you can nurse or have a sleeping baby on you and read….one handed. Click the button to turn the page…TA DA!

Thing I Love – My Woot Necklace