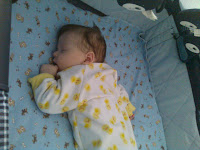 Remember the woes of a non-napping baby?…they are no more. He is sleeping right now matter of fact. Since I had such a hard time with this…I thought I would chronicle what worked/didn’t.

First off, I hate to say, there was no prayer of this before about 10 weeks. Looking back, I was right to be looney…I never knew when to put him down. On top of all that, I was scared of just letting him sleep on one of us because that would mean he would learn to associate naps with us…and we would never get anything done. I was wrong. It was fine. So let them if this is the only way they will sleep. If you recall, our pediatrician pretty much told us this. Until they lose their startle reflex, get them to sleep however you want. Drive to Kansas, stroller rides until you have holes in your shoes, ANYTHING. Also the concept of “crying it out” this earlier was silly for him. It wasn’t a fussy cry I hear now…it was bloody murder. He was never going to calm down. So rock, jiggle, stroll, swing…this too shall pass. I say that, but I know it isn’t helpful. I would just get pissed when people would say “it will get better”. It seemed so far away. So you can write me off too…I understand.

Now I have to say I have cheated a wee bit. Remember that LT rolled over on his tummy on his first day of full-time day care at 10 weeks? He does it like a champ now…AT DAYCARE. He has yet to do it here unless we have him on his side a little with some light patting…then BLOOP, he rolls right on over…and it is like a light switch. He can put his hands in his mouth and out he goes. So I have now cemented my worst mom of the year award by putting him down on his tummy! GASP! He sleeps SO much better. If we try a back lying nap…it is about 20-30 minutes and that is it. Tummy=2 hours or more. Suck it SIDS. I also figure, if he does it on his own at daycare, his body is capable of waking. He has great neck control and even wakes, shakes his head and goes right back down. We also put him on his tummy at night for the same reason…but recall we have the movement monitor which gives us peace of mind.

So here is how the nap thing has evolved. I have kept all Landon’s daily reports from school since we started. Kevin laughs at me…but whatever. I will throw them away(some) eventually but it has paid off. I could look at the past weeks and see patterns. He has let his out routine emerge and we run with it. It seems to work beautifully. Also, all those sleep books, most of them are right about this stuff. Some stuff I read that rang true:

So he eats, we play, and when he starts to fuss. He gets his sleep sack on and we walk around for a minute to get drowsy. I put on the Rockabye Baby! jams. I put him down on his tummy and he starts sucking on his hands and I jiggle the pack and play a little bit and naptime commences. There may be a little bit of fussing but he works it out and we are good. From his dailies, I see that if I feed him at 8 when we get to school, he goes to nap time around 9:30(and by around I mean a 5 minute window…creepy huh?). If he has a bottle, he usually eats around 8:50 and naps around 10. He then sleeps until 12 when I come to feed him(or this week he woke at 11:55 for his bottle). Then he is up until about 2. The afternoon is a little less predictable but it seems pretty consistent. He usually sleeps until 3:30-4 and then eats again. we get him at 4:30…go home…play…and at 5:45 we start the bedtime routine.

Now this week I made a silly mistake of waiting like 10 minutes later to take him to bed….BAD IDEA. He took longer to go down and then worked himself into a mess when we let him cry it out a little. I went up to a sweaty mad baby. I held him in front of the fan and he was back out in 5 minutes but that just took a little longer…my bad.

Now concerning the early bedtime, I get a lot of “wow that is early” comments. But then I remind some of the there people of their trials of the “witching hour”. I believe I read in the No Cry Sleep Solution that a big reason why kids have this is because they are tired. So going to bed early helps this. It doesn’t mean they are going to want to be up earlier either. We kept trying for an 8 bedtime but we spent a good portion of our evening passing him back and forth to walk around and lull to “SLEEP”! Why not just put him to bed?….none of us were getting quality time in. Now he is happy, we can eat together in peace and have time to ourselves. Thus the 6 o clock bedtime! I think I heard from the author of the 3 Day Sleep Solution that 6 o clock in a prime bedtime for babies. And she is right with this one!

So there ya go, what I learned. And now that I wrote this, it will all fall apart…but whatever. 🙂

6 Music Videos to Get Kids Moving