I know I am jinxing myself but whatever. The Wolfpack won…the world is all kinds of crazy. Anyway, first off, we tried a little of crying it out in the wee hours this morning. He was fussy and I was exhausted so we gave it a whirl. He was fed and changed so I soothed him and left him. He started crying. We let him go. He cried hard for about 10 minutes then off and on for another 10…then randomly a little one here and there for 5 and then was silent. He started up again with little ones an hour later but I went in and his little nose was stuffy…so he was waking up, crying 1 time and then trying to go back to sleep but he was all gooped up. But otherwise…not too shabby.

Second, he seemed to be pretty scheduled with his morning nap this week at daycare so I ran with that. I looked at the times and it seemed he would go to sleep anywhere from 9:15 to 10. This correlated on when he had been fed since it was different times different days. So this morning he started to get fussy playing, so I scooped him up and walked him around on his belly to mellow him out. Then Kevin got him and patted him back on his side and he fussed and rolled over and we turned on the music in the Pack and Play and giggled it for a minute and OUT. He then slept for 2.5 hours while Kevin played video games and I showered and cleaned. It was GLORIOUS. I even had to wake him at 12:30 so he would eat…though he was eating his hands in his sleep :). The afternoon nap didn’t go as well…it was a kitten nap but I think we got him down a little late. Thanks daycare for giving me a freakin clue about this boy! Anyway check it out: 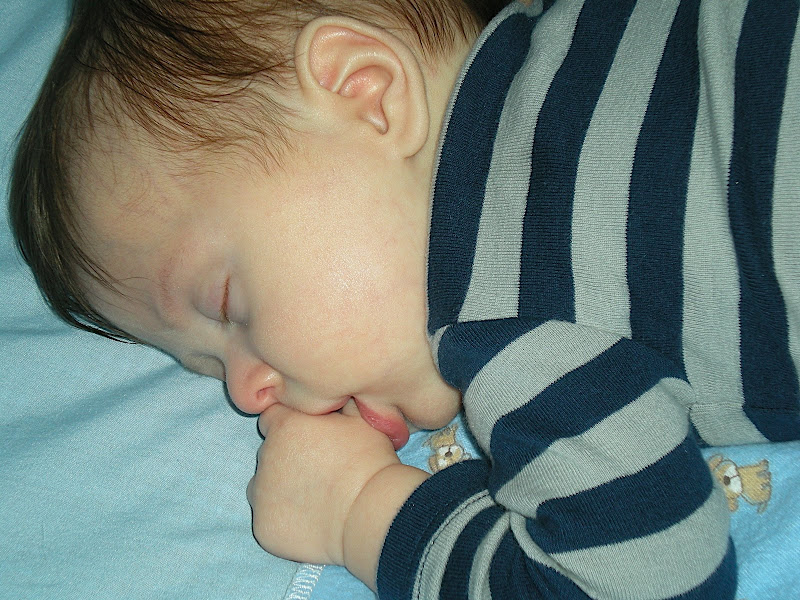 So we finally got him to nap in the pack in play…with very little fussing…for 2.5 hours….and he found his thumb. He is pretty much going to be walking on his hands by 5 months and working on the unicycle by a year…I just know it.

P.S. He just went to bed like a CHAMP….just please let us have a good night!