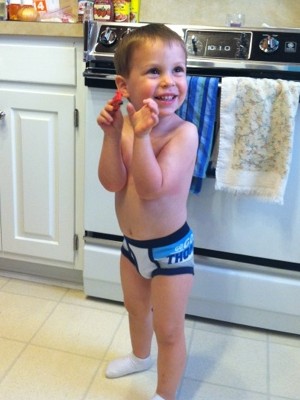 It has begun. The first signs of actual potty training. Part of me didn’t want to document this until we were in the clear but a) that will be some time in the future and b) people keep asking me.

It all started maybe a month ago. All of a sudden, the bribes started working. Remember the sticker obsession? Well we have been keeping that in our back pocket. No stickers in the house unless there is potty time. We also upped the ante with M&Ms (I may have stolen some from work…don’t tell). Well he started asking to go…like a lot. When we got home from the time he went to bed, it could easily be 7 trips to the potty. Oy. But hey, it was working.

He learned he could poop at almost anything. He could squeeze out SOMETHING to get a sticker. This got annoying but I figured it was best to roll with it versus cause a ruckus. Most people complain about their kid not pooping, so I figured this was better. Peeing was the unknown. He didn’t seem to understand it. He would stand at the potty (he only wants to stand like Daddy) and try and squeeze it out. Like clenching. Yes…it was hilarious. I figured he just wasn’t getting it.

With all the work at home, he slowly started trying again at school. When all his friends went, he tried. Sometimes there was success and sometimes not but we honored our promise of stickers and candy when he got home. This also reminded him one we got home that he should keep it up. We still weren’t really pushing it a lot. In the afternoons we would slap a pull up on him to make it easier on us and let him run around. He never got the picture disappearing or the coolness feeling from the pull ups. Basically we just didn’t have to fuck with a diaper.

Then cue a sore and red weenie. Randomly he would have a red and slightly swollen “member” when we were putting him to bed. He didn’t want us to mess with it. By morning, it would look better. I think we have come to the conclusion that the pull ups are bothering him. So with that realization, one evening he had pottied and I didn’t have a diaper to put back on him but we were going right up to bed in like 5 minutes. I just put his little cotton shorts back on with nothing until we could get upstairs. Once we were getting ready for bed, he came running “Mommy, I need to potty”. Low and behold, he went! BREAKTHROUGH. Next morning I did it again with just his PJs while we are getting ready and he did it again! 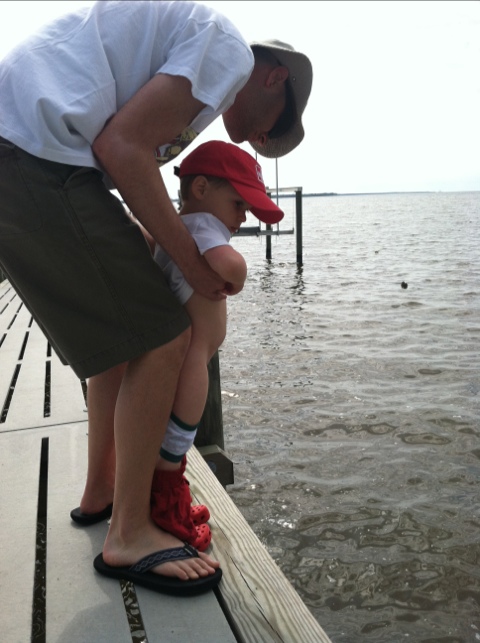 We were headed to the river for the weekend and so we packed up the Thomas underoos and figured we would give it a shot. He was stoked. We told him that when we got to the river, he got to wear his big boy underpants. He even carried a pair in the car. It was so cute. So evening one, no accidents. He was in them for maybe an hour before bed. Peed in the potty…dry Thomas. Saturday we put them on bright and early. We let him pee outside and inside. Sometimes he would just have on cotton shorts and by late evening, he could pull them down and pee in the grass. Even inside, if he was playing with his trains, I could see the face and then the “I wanna go potty” and he made it just fine. I think we had a total of 4 accidents all day. Silver lining? It was only pee and we seemed to note it was only when TV or iPad was involved. When he was in that zombie state, all bets were off. This was kind of a sign to me that he isn’t QUITE ready. He didn’t even tell us he had an accident, we just noticed. Hmmmm.

So I think our next step may be to send him to school sans diaper with a suitcase of wardrobe changes and see what happens. Daycare has offered this and said they are happy to take it on. I think he may do really well. If he doesn’t get into zombie state, we might be good. Then add the accolades and peer pressure, we might have a good combo.

My one remaining question here is with the pull ups. I think we might try another brand and see how that goes. I know we will need something for naps and such but I guess diapers could work for now. We are no where near a dry diaper upon waking anyway.