Now that sounds like a kick ass band name but I thought I would talk about Landon and his nose bleeds. I have mentioned it before but never in detail. I figured I might as well to help parents with this issue learn that it’s OK and life will go on.

(Un)fortunately, Kevin was plagued with the same problem as a kid. It is a good thing now because he knew the minute Landon started to get them that it was completely normal and nothing to freak out about. Just the way junk is formed up in there and changes in pressure and climate. This was good for when you find your child like this one morning: 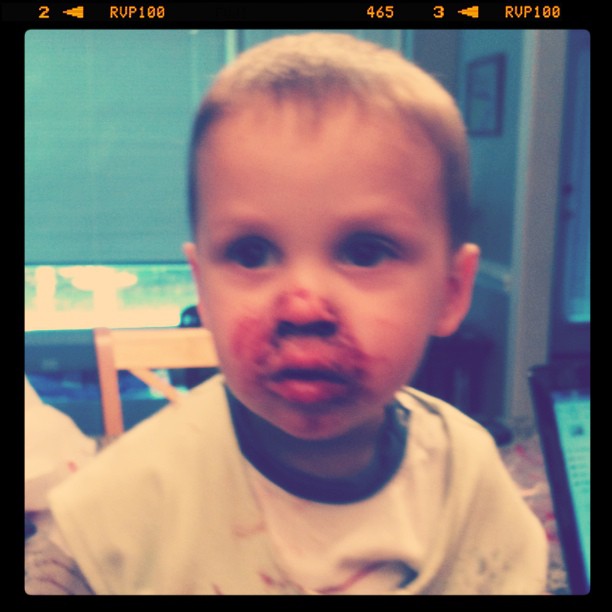 Yup. Now he had had blood from multiple teeth coming at night before but this was impressive. Pools of it on the sheets, sleep sack covered, crusted blood in his hair…I wish I would have been witty enough at 6am to come up with an alternate story line involving ninja toddlers on a mission to steal his Thomas…but alas, I just felt sorry for him. He hadn’t really even woken up all night so it just kept collecting. We could have never known. Ever since then, we have no stain free sheets and learn it just happens.

I give some credit to the calm nature about this to my mother in law. While it was an issue when Kevin was little, his mama is no stranger to the grosser things in life since she pulled calves and castrated sheep while pregant (and you thought I was bad ass). She dealt with it in a calm and collected manner. Apply pressure and move one. His did happen a good bit and so they eventually got his nose cauterized to help it a little from being a hassle. I have been on the fence about LT with this. When we go through a week of nose bleeds, I think about it but then it stops and I forget about it.

With our calm approach to it, I think we have helped Landon mature. I know that sounds silly for a 3 year old but I’m serious. He takes them like a champ. Never freaking out. Like this morning, he came walking into our room “my nose bleedin” and sure enough it was just starting to drip. He managed only 2 drops on the carpet before we got him. He then grabs the tissue and holds it. Seriously…it is amazing. We can wad it up and put it up his nose. No worries. He doesn’t fight us…just goes with the plan. This has happened at daycare many times. Usually the first time in a new room we get a panicked call from the teacher and we say “is he ok?” and they say “yeah he is really calm and helps us clean it up”. Then they talk to his previous teachers who find it old news and everything is fine. He has been known to get up from nap to go get a paper towel before it really starts. I mean CMON…a responsible toddler? Who coulda thunk it?

So a few tips for nose bleeds:

5 thoughts on “Landon and The Nose Bleeds”