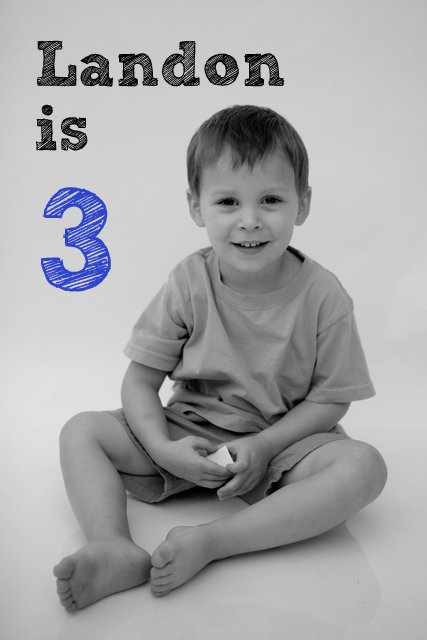 Today Landon turns the big 3.  As for his attitude, he has been 3 for a few months now. Oy. It’s a doozy.  Add onto that a 16 day old baby and you have a house gone cray.  So today we are taking it easy. Landon will be presented with a new-to-him set of tracks for his trains and 9 new ones complete with carrying case. Thanks SAS Bulletin Board! I will post his reaction if I am not so sleep deprived I forget to record. His Thomas party is later in the month…and super low key with a newborn in tow.

The year of 2 has been awesome, I must say. He is such a character. He has never met a stranger and is always looking for that “special” in everything. He loves getting the green straws at Starbucks and honey on his waffles. He does everything with his best friend Josh just like in infants and even has a crush on a little girl named Sophie. He can be seen carrying pairs of underpants around along side a plastic screwdriver on most days…because that is what you do at 3. Just like his mom and dad, he is a ham. We have to keep our laughter at bay so often just so he doesn’t get wind of it and derail whatever we are doing( usually dinner). Like the time he uttered “you’ve got to be kidding me” when chasing spinach around his plate with a fork. He also has a knack for slap stick comedy including “falling down” on command.

Landon eats pretty much anything. He has a little aversion to new things but a small promise of a “special” to try it, usually leads to “mmmm this is yummy”. He loves spinach leaves so much he will pick them out of the salad with his hands to eat  them. He thinks he is the cat’s pajamas for eating a whole apple by himself. I don’t make up toddler dinners, he really is THAT kid.  I am writing this down for when he decides to curse me and never eat a vegetable again.

This kid never stops talking (yeah yeah just like his mama). He makes up stories with his toys. He loves to pretend. He loves to “hunt” for things. Yesterday, it was looking for dog poop in the backyard to clean up. Hilarious AND helpful. He can work his iPhone like a boss and loves all things Toca Boca. His favorite things still remain Thomas and Cars anything…including undies and toys.

This year brought a lot of leaving the baby behind. Potty training…which went so well that we keep waiting for it to regress and kick us in the ass. Maybe this is karma for colic? He is so good in fact that he is happy pooping and peeing anywhere that is needed. Side of the highway, woods, public potty…you name it. Phew. Then within a few weeks of that, we moved the crib out and the big boy bed in.  He never batted an eye. He loves having the freedom and even uses it as his “space” when he gets angry and upset. Big boy mode activated.

He is being a great big brother already. He constantly wants to see “Oviler” and give him kisses. Tonight he even let him “tickle” him with his crazy newborn zombie arms. He has also dubbed their dynamic duo names as “Lando T. and Ollie D.” And yes, it is as adorable as it sounds. I can’t wait to see these 2 play together.

So happy birthday Lando. We love you very much and please be gentle with the “3s”.

Now for a little fun, leave a comment on what you think Landon will be when he grows up and why. Should be fun to look back on 🙂