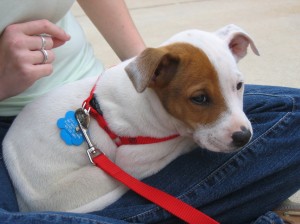 Remember me having a house of boys? Well even the dog has me outnumbered. Lately he is getting little attention and I feel bad. I wish I could take this time to walk him more since I am home and looking for Ergo walks but IT IS BALLS HOT! Not to mention I feel like the humid walks we DO have are making his acne worse…but anyhoo I thought I would chronicle why it is so easy for me to walk Jackster with a little (or 2) in tow. He really is a great companion on walks and I can’t take all the credit.

First a little background…We are dog lovers. Kevin and I both had dogs growing up. We adopted Jack in April of 2005. Yes folks…before we were married *GASP*. We found him on Pet Finder at a shelter in Sanford (CARA is a great rescue organization we highly recommend). It was just him and his 3 brothers…all named after Johnny Depp characters who were found by the side of the road with no mom. Willie, Edward, Icabod and Jack Sparrow. Jack was the runt and named as such because of his eye patch…like the pirate.

We adopted with the thoughts he would be a Jack Russell mix. He looked like a JR…just a little bigger. He weighed 8 lbs. The vet told us that they thought a boxer mix. “Probably be aournd 30 lbs”. 30 lbs came and went and they kept estimating he would stop soon. Ha.Ha.Ha. Jack finally topped out at 75 lbs. Far bigger than we planned but we couldn’t have been happier. We grasped the big dog lifestyle and ran with it. We had the space and time. No worries.

Even with the thoughts of a Jack Russell, we knew we would have to be pretty active. Early on, we walked…A LOT. We were fresh out of school with regular hours for jobs. ALL THE FREE TIME!!! I was known to take him on hour long walks because why not? With that, I wanted him to not act a fool on a leash. I wanted a dog I could trust. Come when called, not drag me down the street, etc. We did a small obedience class at Pet Smart for the basic commands but the training really started when I watched the dog whisperer, Cesar Millan. It all made sense to me. By nature, dogs are very intelligent creatures who can do a lot. As pets, we often forget that.

Soon there after, I got his first book Cesar’s Way. Life changer. Really thought provoking stuff from a dog trainer. With all of this, I took away a few key pieces.

One big thing I took away that I quote kinda often is there are 2 types of exercise for a dog.  There is mental and physical. Jack is a text book example of this. When I trained for my half marathon, Jack trained with me. His record is 10 miles. He could do those runs and look at me at the end like “what’s next”? This was mental exercise for him (of course some physical too). Walks are always more mental for us. Since he is trained, when we walk…we walk. It isn’t time to sniff every tree and dart around.  He takes it on like a job. Head and tail up and looking ahead. Ears back and listening. Now he does stop to pee and such but only when I stop. There have only been a handful of times where he has jerked away to poop and it was usually something was upsetting him.  It is a constant walk of listening and responding to my cues.  Stopping at cross walks. Hopping into the road to avoid something on the sidewalk with a small whistle. It is a dance between the 2 of us. It is also why I trust him to walk with me and the kids. I have never felt he would be bothered by strollers, wagons, etc. He walks right beside us and stops when we stop. Simple as that. We even trained Jack to walk on the treadmill. So when it was raining or I was super lazy, he could get some energy out. We would do this for 30 minutes in the morning before work while we got ready. Worked like a charm.

Some other mental exercises we do are hide and seek either with people or toys. He sits in one room with one parent and the other hides. Then he is released and has to find us/the toy. We also do “treasure hunts” in the yard to keep him busy by scattering kibble around the yard and he goes looking for it.

The other type of obvious exercise is physical. This is more of “free play” in my head. Jack enjoys catching frisbees, swimming and playing chase. He goes to doggie daycare once a week to get a good bit of this. He wrestles with other dogs, chases them and just is A DOG. One tip for running a big dog around with a small yard, find an empty tennis court and take them there. Fenced in and they don’t get muddy!

While I learned about helping a dog learn to walk on a leash, I learned about confidence. Not that I wasn’t confident before, but he shows how it makes a huge difference in all aspects of life. Parenthood, your job, interactions with just about everyone. While the book had great examples of this, I found the show gave you the visual. If you are scared of your dogs actions or taking them out, they know it…and they run with it. It sounds silly but act like you are the shit. I mean think about it. You are out with your dog who THINKS you ARE the shit…so play it up. Walk with purpose. You are the leader. Shoulders up and back and strut. I know it sounds silly but it makes a difference.

Now while that is pure dog walking advice, this pertains to life too. You ARE important. Confidence is more noticeable than a new haircut or an expensive necklace. If you value yourself, so will others. I’m not saying be a cocky asshole but show the world you are important. If dogs can pick up on it, surely humans do :). I’ll stop my Tony Robbins speech here but just know that this little tidbit with dog training helped me be more confident. Give it a try.

Now I have to say I had to qualms about breeds before reading the book but I wanted to point it out. I would also like to say I have been bitten by a dog as a kid…a toy poodle and a pomeranian. If you think you are getting a dog based on breed, just stop. They are bad stereotypes. Just like you wouldn’t not friend a person because of their race, why judge a simple dog? Pit bulls aren’t going to maul you just as golden retrievers aren’t going to let your kid ride on them. It’s about training and discipline.  All that said, do know your breed for activity level and size. A basset hound is going to take up less room and require a lot less activity than a Vizla. Simple facts there. If you have a dog that needs lots of exercise, give them that or you are going to have a dog pent up with energy. 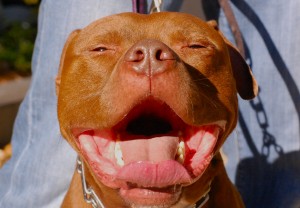 Take Muggs for example. He was at a shelter as an obvious “fight dog gone wrong”. Look at that jaw but ya know what? Sweetest dog EVER. He goes one long runs with his owner Tim, daily and is a role model for “misjudged dogs”.

So as a public service announcement: STOP JUDGING DOGS ON THEIR BREED!

A voluptuous trip down memory lane

The River for July 4th

One thought on “And I’m Still A Dog Mom Too!”