I know a lot of you have always given me the side eye because Landon eats so well. I know it is downright annoying to you. For that, I am sorry. But I did want to make your day and express with great hatred that we have hit an ugly phase of meal times. I like to think of it as an unwelcome guest to the dinner table. That guest is brought to you by the letter 3. Here is a list of the issues currently:

So yeah, it sucks and I can’t even complain that much. Kevin has to deal with most of it because I leave once I am finished to put the baby to bed. It isn’t uncommon for me to eat, put Oliver to bed (bottle, bath, rocking) and still come down to the him in the high chair with a weary looking husband. We are over it. Normally I would ask for advice but I know it is a phase. He still has nights of eating great. Hell he went shopping with me yesterday and wanted a zucchini and I gave him raw slices with salt. He loved that! WTF? Promises of dessert work SOME times. I’ll admit to eating brownies in front of him to prove a point….a delicious point, mind you. It could be worse so I am just holding on for dear life and still grateful he will eat a vegetable and drinks milk. Just wanted to let you know I don’t have some rainbow unicorn dinner experiences at my house. Cheers!

So a few dinners from the week: 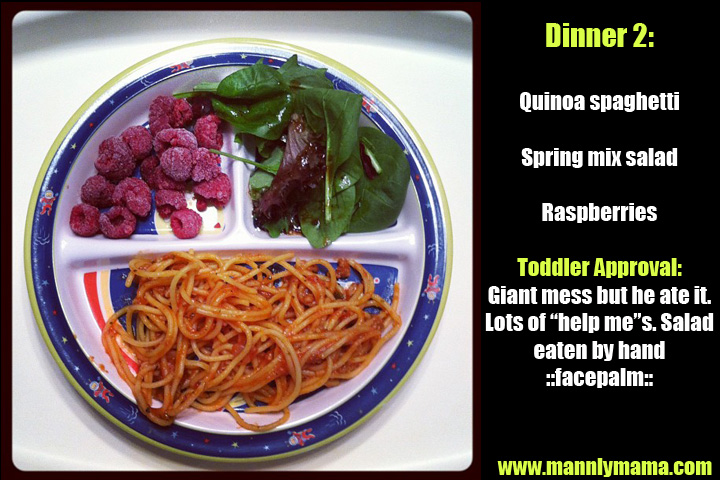 You can see all the #toddlerdinners by me and many IG users throughout the week by following the hashtag.

P.S. Follow up from the Colic post: While we are out of the “colic” stage, we have a witching hour. We handle this day to day but often Oliver is put down for a nap around 5:15. He seems to do well with this. Sometimes he sleeps for 30 minutes and is up and other times I finish dinner and go get him to be up for a bit before bed. It seems to be working well for us and gives us a “quiet” dinner together. We can talk to Landon and not have to jiggle a baby.

11 thoughts on “Toddler Dinners: The Ugly”