When Landon was around 11 months, I started wondering about getting off bottles. The idea seems so hard, right? Since he was in daycare at 10 weeks, he got bottles during the day. He was still nursing morning and night but most milk was in bottles. And every evening, we looked at the pile and thought “when the hell can I stop washing all these?” On top of all that, I didn’t want a toddler carrying bottles around. Mission: get him other ways of getting milk. He slowly dropped bottles at daycare and on the week of his first birthday, we dropped the last one on his own. He just didn’t want it. HOORAY! 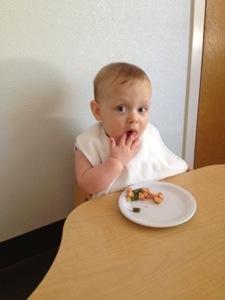 So now we are coming to the 1 year mark for ole Ollie beans (Landon’s nickname that I freakin love) and wondering the same thing. Fortunately for us, our daycares are Montessori (Ollie’s) or very close to it (Landon’s). They stress independence pretty early on. We like this. Being 2 only children, we know the power of independence. One thing both daycares heavy to stress is independence with food. It’s also why I did the baby led weaning approach a little. Learning to eat on their own was important to us. With that, using an open cup is started as soon as they are sitting at the table (both boys around 6 months). The cups we use look like little versions of restaurant type plastic cups. A little larger than a shot glass. Ollie is doing really well with it and even learning to grab himself (see below with his teacher Miss JJ). 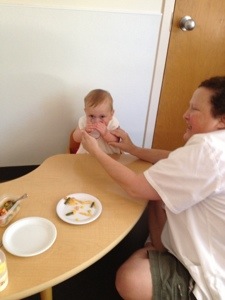 So around the 10 month mark they asked me to start just sending 1 bottle for before afternoon nap but just a capped bottle of milk for cups for snacks. So he gets an 8oz capped bottle for meals and snack and a 7 oz bottle for nap (note he doesn’t get quite that much on the weekends). He then would have a morning bottle and small bedtime bottle.  Recently I started making the other 2 bottles and just serving as much as I can in open cups at breakfast and dinner and then just give the remaining in a bottle. Some days, he never gets the bottle. He just drinks it all in the cup. It is going really well. Daycare told us he seemed to start to really get it and so we ran with it.

Now with Landon, it took a while to find the right kind of sippy. It seems to be the same with Ollie. They either just want to bang it on the table or chew on it. And this time around, I am honestly lazy. I was buying tons with L but meh. So I have dragged my feet about it but PROCRASTINATION PAID OFF. While meeting the lovely Maria the other weekend (she is a mom of 5 and foster mom…so HIGH FIVES TO MARIA) I was ranting about this dilemma and she told me what she always does. It is so simple I can’t believe this shit isn’t Pinterested like WHOA. 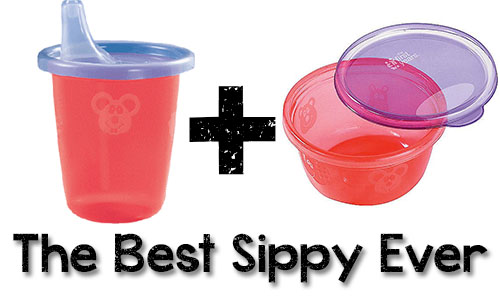 Take the sippy top from a Take n Toss cup and put it on a small Take n Toss small bowl. BAM. It is small enough they don’t have to tip it far. It is cheap and reusable on many levels. I broke this idea out on Saturday and SHAZAM. The small size is nice for him to grasp and isn’t too heavy with liquid. I think those small containers have a max of 4 oz. The one thing is that it isn’t spill proof but right now I am just working with getting him off the bottle. Baby steps.

So what is your story with switching off bottles? Did you struggle? Have a magic bullet that helped bridge that gap? Did you have to transition a breast only baby to a cup? I am looking for community here because I know this issue is a tough one and very individual.

A voluptuous trip down memory lane

9 thoughts on “Infant Dinners to Toddler Dinners: How We Drop Bottles”