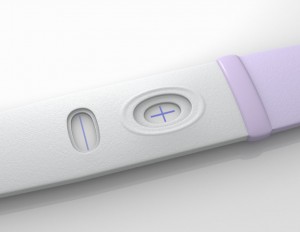 Well besides the obvious…..

Anyway, ever since the announcement, people have been asking the usual questions, so I thought I would cover them here real quick. Warning: I go into some medical detail (for lack of a better term).  Leave now if you don’t wanna hear it.:

Is this why you are selling your house? – abstractly yes.  We had planned on putting the house on the market at the beginning of the year anyway.  We are still in our starter home that we thought we would be out of by now.  But the shitty economy and general laziness had us dragging our feet.  We have room to sleep another body (3 bedrooms) but we have no extra room for things we use.  The treadmill, workout equipment, crafting supplies, larger kid toys, etc.  Right now we use the extra bedroom and closet for these things but that ain’t gonna work really well with another kid.  It is doable…just not desirable.

Was it planned? – Well kinda 🙂 To piggy back onto the statements above, the plan was to put the house on the market and see what happened and then eventually start trying for numero 2. We are financial stable and ready for the second…it was just trying to get ducks in a row…but really, when are they ever in a row? So we haven’t been on permanent birth control since Landon was born.  I know my body. I analyzed that mofo trying to get preggo with Landon so much that it is just kinda engrained.  35 day cycle…like clockwork.  Then about 6 months ago, all my O signs were basically slapping me in the face.  Cramps, textbook CM, boob pain, you name it. It was kinda surreal. So we followed that pattern.  Then November came and threw a wrench in the mix.  I had it all planned out accordingly as usual. Then when we headed to the river for Thanksgiving thinking I had another week before good ole AF but something wasn’t quite right….

How did you know you were pregnant? – Welp, I just did.  I did this rodeo before.  It was a little freaky. We were at the river and we went for a family run.  A simple, flat family run in Bath.  I was clocking sub 9 min/miles the week before but that day, I was STRUGGLING. It sucked. Now I didn’t really know then but looking back I do. That evening we are making dinner and drinks and Kevin’s drink made me want to vom. That was sign 1. Next day I felt bloaty and just blech. I told Kevin I thought I was. Test…BAM. Pee didn’t even make it to the control line. I had EVERY symptom. Sore boobs, nausea, headaches, short of breath. Textbook pregnant. Go figure. That clockwork cycle was a week early. And here we are.

How have you felt? – crappy. Weeks 7-10 sucked. Nausea out the ass. Headaches. Sore, giant boobs. Biggest let down was I signed up for a half marathon the week before I found out. So with how I was with Landon, I felt like I could still do it. There would be walking and way slower but doable. Already in 7 mile shape. Cleared with doc. Good to go. Cue sickness. Long run day shows up along side pukey feeling. No go. So I am now spending $70 to run a 5K. Joy.

12 thoughts on “How I Got Knocked Up”