I have discussed before my desire to have family dinners.  I had family dinners growing up.  Granted I can’t remember back to Landon’s age but I remember it being a fond memory…even if it was routine sometimes. It took some time in the past year to work it so we can have family dinners.  We have to book it in the evenings.  I have to be cooking no later than 5:30 and dinner on the table by no later than 6.  Sometimes it is tough but we have slowly changed what we eat to fit accordingly.  The grill was a huge factor here (You can read more about my love affair with it here).

Another key to making it work is Trader Joe’s frozen meals.  Sometimes we are in a rush, so we use Trader Joe’s to save our butt.  Let’s take exhibit A: 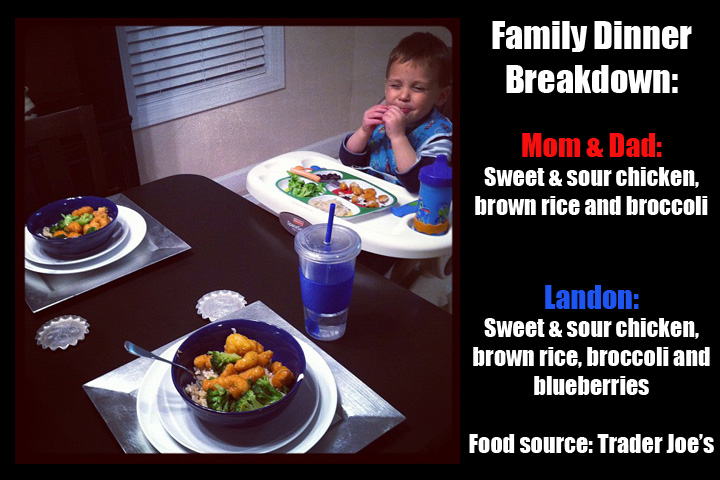 Trader Joe’s provided this entire meal.  Made in about 20 minutes.  I put the tempura chicken on foil in the toaster oven to bake (note: a large toaster oven is also a HUGE win). While that is cooking, I pop a steamer pot with frozen broccoli in the microwave to steam for 5 minutes. When that is done I do the Trader Joe’s frozen brown rice in the microwave for 3 minutes. Once the chicken is cooked, I pop it out and mix broccoli, chicken and sauce together in a big bowl. Serve with rice. BAM! Dinner on the table  before 6 and everyone likes it.

Now sometimes shit happens.  You are running late and there is no time to really get something going OR, in my case, you are throwing yourself a pity party and pregnant.  Enter fast food.  We don’t do it a lot.  Pretty rare actually but I had a weak moment this week and Chick fila was there to help.  Exhibit B:

I like Chick fila because DUH…it’s awesome.  There is crack in their spicy chicken. I also like them because they have a 1 strip kid’s meal. Landon can barely eat the 1 strip.  Hell it usually makes 2 meals. It can come with a fruit cup and I use the kids size lemonade to give him over 3-4 days diluted with water.  It is his special treat that he LOVES. Everyone is happy and stressed mommy doesn’t have to deal with convincing her child to eat dinner. Everybody wins.

Then, as I have stated before, I am the queen of leftovers.  The amount of tupperware in the fridge at any given time is kind of staggering.  But it comes in handy…mostly for toddler dinners but on this night, it was for EVERYONE! Hooray!  We all got something different and I heated it all up in about 10 minutes.  Not gourmet cooking but we all are eating together…goal numero uno. Exhibit C: 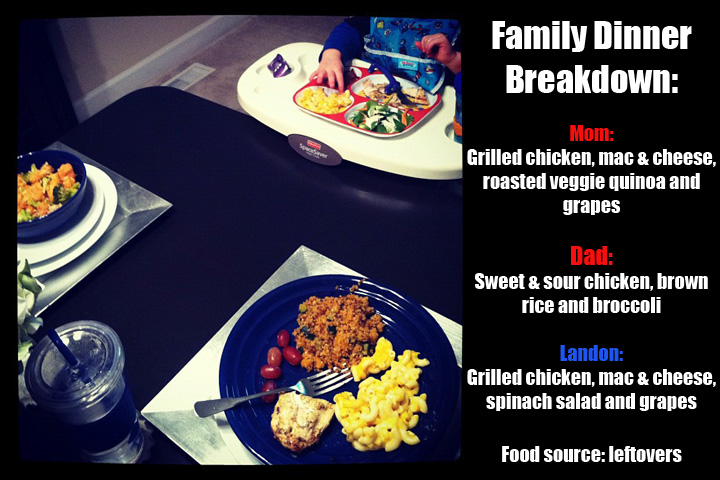 Strangely I had the “less guilt mac and cheese” from Trader Joe’s.  It is by far the best instant mac and cheese and Landon kinda picked at it.  Idiot.  The quinoa is also a Trader Joe’s item that only I eat.  I keep a bag in the freezer and just heat up a serving at a time for just me.  It is great with roasted sweet potatoes and zucchini in it. Landon doesn’t hate it but it is a mess for him to eat..so I usually avoid it.

So that was a smidgen of our week.  It is starting to take a lot of work to comment on every meal so I am moving towards a more truncated version for the weekly reports. I will still do a picture each night on Twitter/Instagram but just not recap them all.  If you have questions about a meal throughout the week, just ask.  I am happy to answer.

NOW it’s YOUR turn!  I have set up a linky thing here for you to share your meals.  Be it one meal, a week’s worth, your goals as a toddler parent, issues you are having, etc.  Blog it up!  Then come here and link.  I am excited to see every body else’s dinners.  I will leave this one open forever.  So you have as much time as you want.

Toddler Dinners is my weekly series of posts to explore the world of feeding munchkins. Each Monday I will post our previous week's meals and a rating on how they went as well as discuss numerous issues we all face. Find out more here.Also be sure to follow me along throughout the week with your creations on Twitter and Instagram with the hashtag #toddlerdinners. 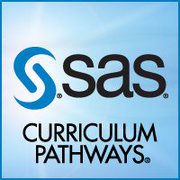 I Make Free Stuff for Teachers. Come and Get It.

So You’re Thinking About an Instant Pot

One thought on “Toddler Dinners: Breaking Down Family Dinner”