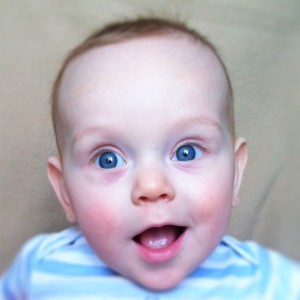 We made it. I have said since day 1 that I was waiting for 6 months. If you think I am horrible for this, whatever. I KNOW those first months are really hard. This time I knew it would make a drastic change by 6 months. I was right. As Oliver is Landon 2.0, independence is the name of the game. Once Landon was big enough to get his own toys, sit up and eat some real food? Game changer. My mom says I was like this too. Frustrated that you can’t make the world work how you want. Trapped in a little body with shit changing all the time. Babies have hard lives. No wonder he can spew fury but I digress.

Here is the goings on in the world of this spunky 6 month old.

This boy loves food. My original plan was to wait until 6 months to introduce solids but the boy was eager. Before he was 5 months old, he grabbed a pear from my hand and went to town. Thus we have started Infant Dinners. I have yet to find a food he turns away. He only eats 2 meals a day right now because trying to sit him down for breakfast after nursing isn’t in the cards for our morning routine right now. I will figure out at some point. Here is a running list of foods he has tried: 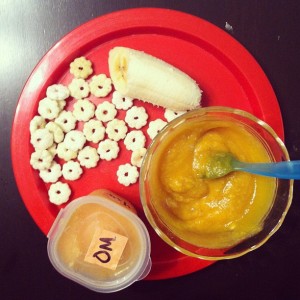 During the last month we have also added a small amount of formula. You can read about that here but we are now only using about 2oz a day and I could probably get by without it. It is nice to have it as a backup. Now I feel better if I am out and can’t pump when he gets a bottle. I am actually writing about this more for LWM this week so stay tuned.

I still nurse him at school 3 times and then before bed. Nights…well….

We are doing better. Much better. A few weeks ago, he started waking up a few hours after going down. Not hungry. Just up. So we picked a night and started crying it out. He went to bed at 7 and then was up at 9:15. Um, no. So he cried hard for maybe 10 minutes. Then would fall asleep for a few and then whine a little. This went on for an hour and he was out. He later woke in the night and I gave him a 3 oz bottle and he slept until wake up. Next night? He slept until around 3 am and ate the bottle and back to sleep. Since then he just eats once. If he wakes up before 1 am, we let him fuss and he usually is asleep within 5-10 minutes. If he wakes after that, he gets the tiny bottle. I don’t think he really needs it but it works. (I am also using this time to pump. I am already up, so I take 10-15 min and pump. It is helping my supply and I am banking milk for the freezer. It feels SO GOOD.) As I am typing this, he has slept through the night (7-7) 3 times. I think he is getting there.

As for theories of how we got here, there is a few. Age. Solids. Rework of bedtime routine (no food right before bed). Getting his rhythm. Whatever it is, it is better for us all. Thanks, Ollie. 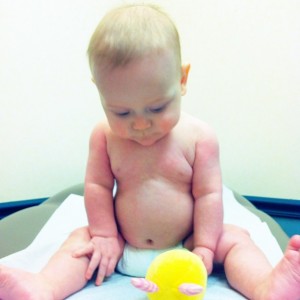 Oliver loves tummy time. He loves to watch himself in the mirror and even recently has started pushing way up then flopping down and kicking his legs. He has the pieces to crawl. It won’t be long. He seems to have no desire to roll to his belly from back. I think he may just not and move to crawling first.

The big one is he is sitting up. Maybe a week before 6 months he could rock a mean tripod and now a week after, he sits up most of time at home. He can still flop over but HOORAY CARPET. He loves that he can bend and grab his toys. He can watch us go around him. He is so happy. With this, we ditched the baby tub and put him in the bumbo in the tub with Landon. The cuteness is so awesome. He would stay in there FOREVER and check foam letters and smile at his brother.

He really loves chewing things. Pacis, Sophie, his socks…you name it. There are no teeth that we see…just a chewer. With that, we have started a sippy cup and he loves chewing on it at dinner.

His favorite thing in the world seems to be his brother. His smile is gigantic when he sees him. I have pictures above his changing table and he just grabs Landon’s and grins uncontrollably. L loves to see him too. In the mornings I can put L into the crib with O and they both light up. L is also helping at night and enjoys giving him his nighttime bottle. He wants him to come in his clubhouses (couch forts) and he tells him about his toys and books. It warms my heart. Note: He still says “Oviler” but mostly just calls him “Ollie Ollie” to copy me saying “Ollie Wallie”

Being January, we knew it would happen. Ollie has had 2 ear infections in the past 2 months. Both seem to just be coming after a mild cold that lingers. He has been able to breathe well and generally faired well. Even with the ear infections, he was pretty happy. He never spiked a fever and kept it together pretty well. Landon was similar and both seem to respond to antibiotics super quickly. He received his flu shot at the 6 month appointment because of the outbreak everywhere.  That shot left him with a pretty nasty bruise at the site. Poor little dude but it doesn’t’ seem to bother him. 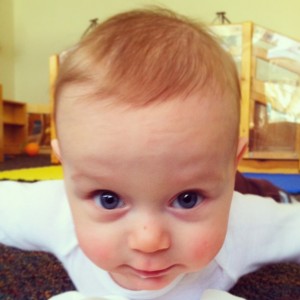 It looks like we jam him full of food at lunch and dinner but the kid wants it. He doesn’t turn away. I first thought this would make him sleep bad because of tummy ache but doesn’t seem to. Boy likes his groceries.

I am doing fantastic. I have found a rhythm. I am getting some sleep. My night pumps are giving me  confidence in the milk department. I am on some great projects at work. The 6 month haze is over and I feel like myself again.

I met with my trainer at the gym last week and now have a circuit routine to last me around 20-30 minutes so I can feed Ollie and still get in a quick workout. I will do that twice a week and then use Fridays for a run or class. I am so happy to work somewhere to help me accomplish my goals. Work and personal!

With all this said, life with 2 is a lot. I feel like I get very few free minutes. I am constantly looking for ways to multitask. You should have seen the excitement when the wifi showed up at daycare the other day! I blog on the ride to work. I work on one project while in a meeting for another (thanks, new fancy MacBook Pro). When we get home, it is a 2 hour all-0ut sprint. Getting them to bed around the same time has been a big step. They can keep each other entertained and we can swap kids if needed. Next week Kevin will be doing bedtime solo so I can attend the women’s symposium at NCSU…I know he will rock it. Teamwork!

The BEST part of my day

We have a preschooler