Welcome to Infant Dinners! Seeing as my “toddler” is now a “preschooler”, I think it is time to switch gears for a bit for Toddler Dinners. I was running low on material that I could provide experience with so I started to look for ways to evolve. That evolution actually goes backwards a bit to talk about the first stages of eating:

With Landon we did the common path. I breastfed him exclusively until around the 4.5 month mark. It was then we started to add a little formula to make up some difference in my pumping supply for daycare. Shortly there after, we introduced rice cereal like everyone tells you to. Then some veggies. Then fruits. I made 95% of the purees. Over time we introduced finger foods and went from there. When he was around 9-10 months old (and eating EVERYTHING) I heard this podcast about Baby Led Weaning*. I was instantly hooked. SO this time around with Oliver, I want to shoot for this for a couple of reasons:

Let babies explore the world of food by feeding themselves and playing with their food (in a  good way). Instead of shoving a spoon of rice cereal in their face, let them learn about FOOD. Not liquefied versions of food WE deem appropriate. This is completely reverse from the typical. You want to start with BIG pieces of food and work down. The theory is they learn how to eat the food on their own. As their pincher grasp matures, they get better at eating. You are working WITH them.

Example: Instead of feeding them applesauce on a spoon, steam a large apple slice and put it on their tray. Let the baby get the apple. Around 5-6 months, they naturally grab things and put them in their mouth (toys, clothing, your hair). Let their natural motor skills take over and let them put FOOD in their mouth (crazy, huh?).

Let’s think of it from a historical sense. Pioneer women didn’t have blenders to puree foods like we do…much less buy some in a jar. How did they feed little ones? With puree, you are teaching them to eat backwards. You teach them how to swallow before chewing/gumming. They know how to swallow (they have been drinking for months now). Now we teach to mash their own food and learn what it is like to actually eat. Heck in the first stages of BLW, they might not even swallow. They may just mash food with their gums and spit it out. Point is, they learn to do it themselves.

I think the biggest hurdle in selling the BLW concept is the fear of choking. First off, I am pretty laid back on the subject. Over Landon’s life, the things he choked on (very brief) are not “choking hazard” foods. I don’t worry abou it as much as some (remember death grapes?). It is usually because he is doing something dumb (like storing food in his cheeks for God only knows why). But with BLW, the clarification is in what is choking and what is gagging. Gagging is a part of learning about food. “Oh I took this big bite of banana and I tried to swallow it” Nope…too big. *gag* and out it comes. THAT is not choking. That is your body doing it’s job. How else do babies learn what they can and can’t handle?

But it is hard to see…I know. You don’t want your snowflake in distress. I get that. I think this is just the biggest adjustment to get used to. And for the record, NEVER leave your baby unattended with ANY food. While I love the independence of BLW, it doesn’t mean I am not right there. I know this was an issue for Katie and she decided to mix her approach with purees in tandem. AWESOME!

THIS is going to be the hardest for Kevin. Kevin has OCD tendencies. Most of the time, this is great (hooray for clean husband and teaching clean habits!) but then when messy things happen, he squirms. The other night when Oliver squished his avocado all over the tray, I thought he might pass out. So get ready for mess. To me, it isn’t that much different than them spitting puree back out. Just as gross. I guess it makes the hands a little more messy but watching Oliver with a spoon now, I don’t know how much different that would be.

How We Are Starting

Now I spew all this with the note that we are new to this and still learning, obviously. I decided Oliver was ready for food when, well, he told me. Some nights for dinner, he sat in my lap. One night we had pear slices. As I was talking to the family, he reached out and grabbed it, shoved into his mouth, gummed and sucked it. Thus, we started solids :). To note, for BLW the experts recommend:

We have all these on the checklist. So where to start? Well the first recommended foods are soft-cooked and cut or mashed into small easily manageable pieces. Some first choices we are going with are:

But really, you can serve what you want. Of course you want to avoid giving high allergen foods up first. General rules say to delay peanuts, honey, cow’s milk, egg whites (and others I can’t think of right now). Meats are ok to start if you are comfortable with them handling them. I mean you can’t start a love of bacon too early, right?

Well I plan to keep up this series with our journey. I can’t say it will be super exciting just yet. We will try new foods. He will like them or not. We will move along. As he eats more, maybe we will have more to chat about but for now, I plan to just post when I feel like I have some issue or break through.

I do plan to do a post on how this is received with others. I can already see this won’t be an option at daycare this early. I get that. So we will be doing some puree and cereals for daycare. Apparently he is mouthing and reaching when his friends are eating already…so I can’t deprive him :).

The main thing I want to reinforce here is that babies this young don’t need food for nutrition. They can be just fine on formula or breastmilk. This introduction to solids is for learning and motor skills. It adds very little to calorie intake. They will still drink the same amount of “milk” until closer to 9 months, traditionally.

As I stated before, we are new to this. I took the traditional route with Landon (which is perfectly fine and works…to each their own). I have reached out and done some research on the subject for you…so here ya go:

Podcast from Gill about her approach

The True and the Questions 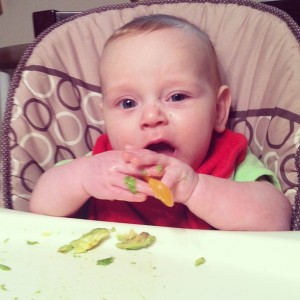 *Because we all gasp at the word “weaning” at 6 months, some refer to it as Baby Led Solids. You aren’t stopping nursing or formula, just introducing them to the world of food beyond milk. The concept was coined by Gill Rapley in the UK where the meaning of “wean” is to “add foods”. Us Americans just have to adjust our thinking :).