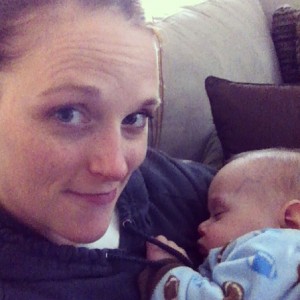 I lay in bed tweeting while Oliver cried…only 3 hours after he went down to sleep. The rage bubbling up in me after nights and nights off erratic sleep. It was wearing on me…my life…my mood…my teeth. The nonstop wakings at all intervals of the night were exhausting because…well…it was the freakin middle of the night and my logic minded brain couldn’t handle it. How can you game plan a sleep training method when his behavior is so inconsistent?

I found myself word vomiting all over Twitter and Facebook about what to do. Maybe someone would have some magical thing to try. I mean, I have read everything about sleep. Baby wise, Wiessbluth, No Cry Sleep Solution( hell I have been in email contact with the author!), Ferber, Sears…on and on. While I know a lot about kids and sleep, Oliver has never slept through the night (I also don’t expect him to magically do it either…) and never showing enough consistency to work with. When I would say to myself, “tomorrow night we will start working on it”, he would wake once to eat and be a dream. Damnit. We don’t fit a mold to easily fix. I have done all the known things. Wanna see what I mean?

I think that covers every freaking thing brought up in all the books. So that’s where we are/were. He would sometimes sleep that first stretch for 6-7 hours (perfectly acceptable to me) and then once again around 5. Then the next night, it was all over the damn place. Waking 3 hours after going down. Not hungry (I tried…just comfort sucks), can be held to sleep but doesn’t want to be put back down. Then the rest of the night completely random. Maddening to deal with. Sometimes he would go back on his own. Sometimes we had to intervene after 15 minutes of screams. Then 2 nights in a row, he wasn’t even being comforted after “nursing”. He would cry when I put him back down…and that never happened. Then his cries would be so weak. You could see him on the monitor trying to go back to sleep but crying out every minute or so. He would pass out for like 10 and then start over again…for hours. Mommy intuition kicked in. Something wasn’t right.
So Saturday morning, after another shit night, I packed him up and headed to weekend ped. hours. He had been carrying the same cough the house had for break plus some spit up from mucus. He wasn’t playing as long by himself at wake times. Sure enough, slight upper respiratory infection but a raging ear infection on one side and fluid on the other ear. BLAMO. Maybe it makes me a bad mom to be so excited to hear your kid is in pain but holy crap I was ecstatic. THAT MEANT I WASN’T JUST DEALING WITH A CRAZY BABY! And? We got meds to fix it. WIN WIN.
Moral of the story: Before sleep training, make sure your child is physically well. No teeth cutting, no cold and no major developmental leaps.

While we aren’t into some magic land of sleeping through the night, we have an answer. Hopefully once this has cleared, we can regear our plan for phasing towards more reliable sleep. And because I am sure I will still need some advice, as well as the readers finding this post, what was the magic bullet for you and your infant?

How Menn Do Photoshoots

16 thoughts on “A Journey in Sleep Training”