Remember back when I had my Netflix documentary binge? Well I did step outside food and found some other gems. One I found was the story of Dr. Bronner and his magical soap. I had not been privy to such soap but immediately upon hearing of its magic from the delightful hippies in the film, I had to have it. 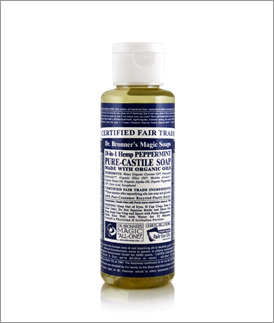 Main thing is the all natural way it is made…and been made that way since 1948. You can read all about that here. Being completely natural, it doesn’t foam up that much…just something to note. It is very liquid (there are bar forms too…so not sure there) but no sudsing agent. It’s primarily made form a variety of oils. We have tried the peppermint and tea tree versions. K and I both love peppermint the best. It tingles…everywhere….so yeah…be careful O_O

You apparently can use this for anything. Wash your body, hair, floor, teeth, dishes…whatever. They claim 18 in 1 uses. I tried it on my hair and it was too much. It stripped away too much and I wasn’t a fan but I know people that love it for occasional clarifying. I haven’t brushed my teeth with it…call me crazy. I would have no qualms using it to clean. Seems like a good idea I just haven’t used it for that yet. I have plenty of  natural cleaners I like just fine. It would make your bathroom smell scrumptious though!

The big thing that sticks out to most people is the ridiculous label. It is COVERED in Dr. Bronner’s philosophy. This was the basis for most of the film. He was one interesting individual. You can read all the labels here. He basically had a belief in 1 God that was over all. All lovey dovey hippy stuff. He was textbook eccentric. Fascinating.

But back to the soap, it isn’t super hard to find like most hippy paraphernalia. I think I got my first bottle at Earth Fare because I was there but they sell it at Target and Trader Joes. You can use their store locator and go find some. It’s cheap, does wonders. Get on it.

50 Shades Ain’t Got Nothing On Me