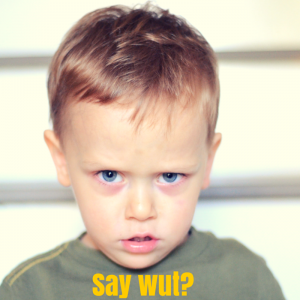 Ollie has been going to the potty (toilet actually. He is very PC.) in his 2 yr old class after diaper changes for 6 months. Not always “going” but just sitting as part of the routine. One day before break, he asked if he could wear underwear like the other kids in the class (to his teacher). They had new packs donated and put him in them. He made it the ride home but then peed in them at home with no warning.

We assumed at that point that his “interest” was more routine of the class. Not that he just knew to go. Not ready but good practice. He rarely ever expressed wanting to go at home…he basically just likes peeing in the shower for novelty. Carry on, school. Go on wit ya bad self. We sent in a pack of underwear so he wasn’t using up the stash and left it at that.

Well he started waking up from nap dry (which Landon didn’t do until near 4!). He started telling them he needed to go at school. So when we picked him up that first day back from break, he was rocking a pair of Jake underoos and a sack of wet clothes (harf). He told his teachers ‘I don’t wear diapers. I wear underwear’. Alrighty then. The only accidents seemed to be minor incidents of not getting there in time or starting before his pants were all the way down. Like ya do.

But we weren’t prepared (Hell, we still aren’t). So when he would come home and have an accident, we would switch back to diapers to save our sanity. He didn’t seem to really care. We were biding our time.

That was a week ago.

By Friday, he had gone all day with no accidents. #1 and #2. And even just gone to the bathroom by himself.

All weekend he asked to go the potty like a champ. Twice at the park. I bought him Pull Ups to just make sure we were in the clear. He does NOT want to pee in that Pull Up and uses it just like underwear…it just has saved us that little bit of leakage trying to get there a few times. last night, he went about 5 times from the time we got home and bed. He didn’t care about missing TV. He didn’t even ask for treats (gummy bears). He just didn’t want to have an “acident”.

So we’re potty training, I guess. Way to sneak up on us, boyhood.

Editor’s Note: I realize that posting this will make him regress but I am still in the shock mode so whatever.