about us apps building a better you facts about Kevin facts about landon facts about me facts about oliver gadgets health nerd alert raising kidlets toddlers
September 12, 2012 Brandy 4 Comments

As today is iPhone day, I thought I would proclaim our love for such a device. I say we because the whole family uses them…even Ollie. It enhances our lives more than any piece of glass and microprocessors should.

Kevin and I got our first iPhones in March of 2010 after Landon was born. Late night nursing was completely changed. I was active on the Twitters and made the group of awesome moms I have today…through that 3GS. It guided me to new places in the car. It streamed new music. It took MORE pictures of my kid. Love at first swipe.

In any given day I do the following with my iPhone:

Then over the years we upgraded and were left with 1 old 3Gs (we cashed in the other). People said to sell it but we hung on to it. Not wanting to part with it just yet. Then Landon fell in love with the iPad and that ish is too expensive for a toddler, so the iPhone became his (minus the phone). Landon sports his “phone” as a reward for good behavior in the car to and from places. If he naps at school? You get the phone in the car. If you don’t? You don’t. It is amazing how well this has worked. We have found his currency. He watches movies we have loaded on there, plays games and watches music videos. He can watch videos on the way to the river, in the waiting room at the dr, at a long dinner at a restaurant. All the while he isn’t hanging up on people who call us or finding apps he shouldn’t.

Now along came Oliver. You say “But how does an infant use an iPhone?”. White noise, my friends. Portable white noise. I wrote about it coming along on Ergo naps but it also works well to put in the swing, carseat, and is even docked in his room at night. Right now he is sharing with his brother. We have most certainly gotten our money’s worth out of that old 3GS.

So today we wait to see what is in store for the Apple family that we have become. I think a new iPod touch is in the works for Mr. Landon since his little bro is already being assimilated. Today…we salute you, iPhone. 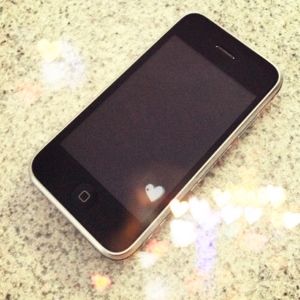 Things Always Be Changin and Junk

Things I Love – Craft A Day

4 thoughts on “Ode to an iPhone”