It’s been awhile since I did a kid food post and figured I should share a few things. This would be for both boys actually. They are on different parts of the scale but alas, they are their own challenges. 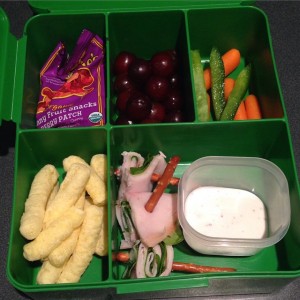 Landon is learning his independence now that he is comfortable at school. No more rough drop offs and he seems to really enjoy his teacher, friends and routine. WOOOT! About week 6 or so, Landon asked to get school lunch like other kids. There was a bit of a gut punch but upon inquiry, I found it was because they had mac and cheese that day. So yeah…good point, kid. So now we let him get lunch at school once a week. He is still so innocently honest that we know what is going on and are just trying to make sure he eats healthy options along with the chocolate milk and corn dog :). It’s once a week and I think the bit of independence outweighs the sugar high for now. I am lucky that he understands what healthy is and genuinely wants to make healthy choices…peer pressure is just part of growing up.

With that said, it has impacted how I pack his lunch a little. I am not going super adventurous and sticking with favorites usually but just healthy ones. He does get 1 treat with his lunch. He seems to favor Star Wars fruit snacks, and that’s just fine by me. I don’t want to make it a packed lunch vs school lunch battle. Having him with me at the grocery store to choose items he likes helps a lot. He gets adventurous on his own. He often requests salad with his lunch. I figure I am winning the good fight here 🙂

In January, I participated in a 10-day sugar challenge with my work. We didn’t make the kids do it as well but by proxy, dinner was no sugar added because that is what we had. They didn’t really notice honestly. We eat pretty healthily and didn’t make a bunch of new stuff so it was no big deal for 10 days. After the challenge, I got a new water bottle for completing it with a little guy on it kicking a bag of sugar. Landon inquired about the logo and I explained that I had done the challenge to help cut back on having too much sugar. Ever since, he has been “hyper aware” of sugar. Granted, he doesn’t know all the hidden sugars in simple things but he sometimes asks about certain foods. He tries to tell me how he chose something for lunch that didn’t have sugar (ha…but he doesn’t know). It’s quite endearing.

I’m on the fence here honestly. On one hand I like that he is aware and thinking about food differently than most kids. Having this nugget is driving him to make healthy choices. Yay. But then on the other hand I worry am I setting him up for an eating disorder at age 5. And to that end, how much to I correct him when he says something doesn’t have sugar and when do I just shut up? Like this morning Ollie said his hands were sticky at breakfast and Landon asked why and I said well that he had picked up the strawberries. He knew that sugar made things sticky so he got concerned about strawberries had sugar. We reassured him that strawberries were healthy but should I be explaining fructose and added sugar to a 5 yr old? Me thinks not. Perplexed.

We are in the think of it. Ollie is full toddler. The stubbornness. The distractions. The TAKING FOREVER. All there. Can’t say anything helpful here but keep doing what you do. I will not cave to chicken nuggets and PB & J for every meal. He gets what we get. He can eat it or not. I will say we saw a little uptick in willingness to branch out in foods after talking to his teacher. We mentioned his tendencies at the table and she seemed surprised a bit. He does just fine at school (shocker…i know). But in talking about it, we realized that one major difference is the independence they have a school. They server themselves every meal. They decide if they want something and how much (within reason). She said it was worth a shot at home. We have started to put all the food on the table and allow everyone to decide. Often Ollie will do the typical fruit and carbs choices but once he sees every one else getting the meat or vegetable, he will ask for some. It’s not full proof but it’s better than throwing a whole plate of food out.

We are also asking both boys to help out with setting the table and clean up now to make it a whole experience. Landon is even helping me assemble ingredients and such. Giving them some responsibilities has really changed their behavior some days. Now Ollie is no where near the good eater than Landon is but we are making baby steps.

So that’s the deal for now. Sometimes I think back to all I wrote about food with Landon and now I’m like “what in the world could I even write about?” So if you are new, know I used to write A LOT about kid food and you can find it all at Toddler Dinners and Infant Dinners.

What issues are you having at home around food?

One thought on “Kidlet Dinners: The Good, The Bad and The Stuff I Put Up With”