This weekend has been pretty low key. Landon and I checked out the Greystone Recreation Center with his buddy Josh and his mommy on Saturday morning. It was GREAT! The equipment is for a little older kids but it was great for them to just run around. He was so happy his friend Josh was there. He would be playing for a bit and then look up and say “Josh?” So cute. They really like each other a lot. They even swapped snacks 🙂 He played for a solid 2 hours and never a fuss. It was magical. We came home, had some lunch and he passed out for a nice nap. 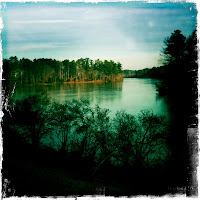 This morning I upped my running tally to a 7 mile run. I have found a new route that is so nice. I run to the lake and around and back. It was GORGEOUS this morning. There wasn’t many people out and it was just so beautiful that I had to stop to take some pictures(above). I love running in the cold weather…I feel like I could just keep going. It was a little dicey this morning with some icy spots on sidewalks so my time was a little lower but I was still under 10 min/mile the whole way! Woot! I am meeting a new possible running partner this week. I am super excited!

Then, since Kevin now has Landon’s cold, I sent him to nap and Aunt Sarah came to help with Senior Fussy Pants. He loves hamming it up for new people…so I could make his lunch. He also learned a new trick and showed Aunt Sarah his love for the Sun-maid raisin lady.

It was nice visit and then the boy ASKED for a nap. He got up early really fussy so I knew it would be early. After lunch I asked him if he wanted to nap and he said “yeah”. Then he didn’t even really want me to read to him. He just grabbed his moose and wanted to snuggle(what he does on my shoulder before bed). It was madness I say!

THEN we went to Landon’s first birthday party(late). He got up from nap and we scooted over to chow down on a cupcake(Thanks Margo). He had a blast seeing other kids and getting all jacked up on sugar. Happy 1st Birthday Margo!!!!

We got home and played outside and I got what I think is my favorite picture of him yet:

Yeah so maybe it wasn’t that low key….

Toddler Dinners: Before and After