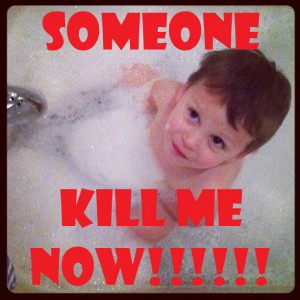 For now anyway. So you may have seen my post, tweets and FB rants about this tot freaking his shit over bath time recently. We still have no clue what started it. This child has taken a bath every night since he was 4 months old. Nothing new. Not a fight to stay up. Just wanted to skip it. Terrified of the tub in general.

Showering was even more traumatic but can you blame him? Water coming at you? Not so fun.

We tried new toys.  I bought crayons and showed him he could color on the walls.  Nada.  We tried to bargain “You can just stand in the tub…no sitting”. Still just screams and tears.

But this kid needed to get clean and sponge baths were just too much trouble for mommy and daddy. So we did what any loving parent would do, we held a toddler exorcism in our bath tub.  Kevin would hold him above the water and I would rinse and scrub as fast as I could.  He would kick, scream, flail and turn beat red in anger. I am amazed there were no bumps on the kid from him hitting the sides and whatnot.  It was not a pretty picture.  He didn’t want to bathe anymore than before and we were just done.  There were no “warm fuzzies” around bedtime anymore.  Just dread. After that, it was hard for me to me sweet and cuddly with him.  I was just plain pissed.

We asked him what it was.  Did the water hurt him? I thought it could be dry skin or something but then he wasn’t screaming if you washed him in the sink…just the tub. He assured me he didn’t have an “ow”.  We talked about the tub, the water, etc.  The only thing we ever got out of him was lint.  He seemed to be scared of lint in the water. He would stand by the edge and point out microscopic pieces of lint. We would clean them all out but still no dice. YOU ARE KILLING ME KID.

So finally we started bargaining again.  I don’t know what made me think of it but I asked if he wanted to stand on the stool in the bathtub. I know, parenting safety out the window! He concured and we have now been bathing for a few weeks by him standing on a stool drawing on the wall while I wash him and Kevin makes sure he has his balance.  He still won’t stand in the water but there are no tears and he willingly comes to the tub.  I ain’t rocking the boat. To note, he isn’t scared of the washing part.  I can pour buckets on his head, wash everything and there are no beefs about it.  It is just the standing water in the tub.  So I guess this is just another chronicle in the journey of parenthood we are going to label “WTF?”

Toddler Dinners: What I Have Learned

7 thoughts on “He fought the bath and…we won”