It’s new years! Everybody is donning their Lulu Lemon pants and hitting the gym, making one word resolutions and organizing their coat closets. YIPPEE. {But seriously, I get a little tingly in the seasonal section at Target full of storage stuff. Is it hot in here?} Right along side these resolution lists, the credit card bill from December comes. 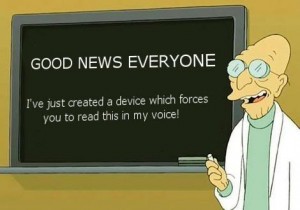 Yup. You start integrating “ways to save money” into that list you started. Well GOOD NEWS EVERYONE! I have an answer for you.

Seriously. You have power. Cable companies think this isn’t a “thing” but from my viewpoint, more and more people are doing it. We cut it 3 years ago and have never looked back. At the time, it saved us $90 a month. I imagine that would be even more savings now because cable companies are twatwaffles.

I know you TV lovers are cringing. “But how will I get Honey Boo Boo and Real Housewives?” I have a secret…YOU DON’T NEED THAT CRAP. One major thing with us was the way our lives changed around TV when we cut. No more mindless watching. We found when you had to choose something to put on, you often choose nothing. I work from home every other week on a day and I almost never turn on the TV for background noise anymore. I play music if anything. Putting the decision on myself to just choose something, makes me not care. It’s pretty refreshing. 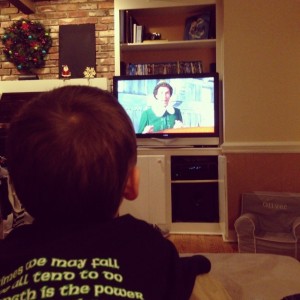 I wrote an update a year after we cut. I figured it was almost another 2 years, I should update. We now have 3 TVs in the new house…each with an Apple TV. We pay for Netflix ($7.99/month) and Hulu+($7.99/month) during primetime seasons (cancel it in the summers). Each TV also has ability to pick up over the air channels for local stuff. We do not own a DVR so that is why we pay for Hulu+.

This is plenty for us. Now we also have Amazon Prime (not for TV reasons but good ole white-suburban-folk-who-buy-everything-online reasons). We are soon going to check out it’s selection. We still have the Mac Mini on the home network and can use on the TV as well.  We can also Air Play it to the AppleTV. The Nickelodeon may be needed for Ollie’s attraction to Blue’s Clues.

HBO Go. Watch ESPN. Showtime. All of these require cable subscriptions. It’s a crock. There are rumors of them each breaking off to a la carte plans. I would happily pay $8-$10 a month for HBO Go. No question. We love their shows and would spend off seasons watching old stuff we have missed. One thing is for sure, I know I would never go back to cable to pay for these services. I know I am not alone.

Note: It is noted people who do have cable subscriptions don’t have a cap on the number of people using those credentials. I’m just gonna leave that fact here and move along….

Not ready to go cold turkey? Fair enough. Here are some things to try

So what do you do? Have you cut? Do you want to? Any other questions? Hit me.

How to One Up Flipgram in Minutes {Tutorial}

17 thoughts on “TECHically Speaking: So you want to cut cable?”