I should be doing work right now. We just put the boys to bed. I have my glass of wine and VPN started. If statements need to be written. Tweets need to be scheduled. My inbox looks like a nightmare but I had to get this out. I want to remember this time…the good and the bad.

4.5 is a tough age. Not in any way I have seen before (I mean DUH). It isn’t like 3 where the meltdowns made no sense. Where it was a whirlwind of pure frustration and anger. A tiny terrorist  tornado. Now? I see his attitude and while I wanna ring his neck sometimes, I realize it’s hard to work through all these emotions. It’s overwhelming. I can see it. I can feel it from him like an aura of fury. It’s hard to watch, hard to reign in, hard to teach how to handle it.

It’s too easy to just say “you’re being silly. There is no reason to be this upset.” Sadly I catch myself saying this too often. When I have to yell just for him to hear me over the sobbing. He left his lollipop in his cubby you see…the world is surely over. Oh and I am a horrible mommy for not going back to school to get it. Just so we’re clear. I wanted to fuss at him “Get over it! It’s candy. You have a ton of candy you never even eat!” but I waited. I like to handle my emotions on my own. I strapped him into the carseat, tears spilling down his face. I explained that we were running late and we had to get Jack from daycare before they closed. We didn’t have time to go back. He said he understood…his demeanor changed to quiet sobs and glossy eyes. As we drove home, nothing cheered him up (not even Life is a Highway) but instead of getting irritated and arguing with my stubborn gene, I let him be upset. He stopped crying. When we got home he says “well mommy. I think maybe my friends will see my lollipop and make sure it is in my cubby for me tomorrow, don’t you?” He worked it out. He got over the anger, the sadness and thought about it in HIS way. He analytically thought through the problem (NERD ALERT). “Sure, buddy. I’m sure they will”. He hopped out of the car and chased Ollie into the house.

That is the boy he is. It’s hard seeing you and your spouse in a kid and knowing what you can and can’t do to help. While Landon mirrors his daddy in almost every way, i think he processes feelings like me. Leave me alone. Let me cry and think. I’ll rationalize it but first I have to be irrational. I don’t wanna talk about it. It doesn’t help. 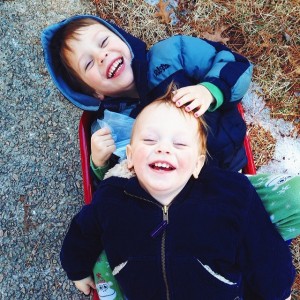 Landon has a range of emotions that is awe worthy. Just as he can be SO ANGRY complete with grinding teeth and stomping, he can be so empathetic that it makes you tear up. The way he wants to make Ollie happy when he is upset by any means necessary. How he can sense when I am having a bad day and say “Mommy, can I be your snuggle buggle?” and just crawls in my lap with his head on my chest. The concern he had over his best friend Josh when he was having a hard transition to pre-K. He loves so hard. He teaches Ollie. Corrects him like we do. It’s enchanting watching him grow.

::grabs another glass of wine. ALL THIS DUST IN MY EYES::

While he loves to run around like a crazy person, he thrives on a drawer of construction paper, markers and someone to spell things for him. He wants to draw constantly. He wants to make up stories. His recent love is writing books. We get paper and staple together and I scribe while he draws. Some days he insists on writing the major nouns. The sponge in his mind soaks up every word we tell him.  When I had to transcribe “surrounded” and “vanished”, I just beamed with pride. 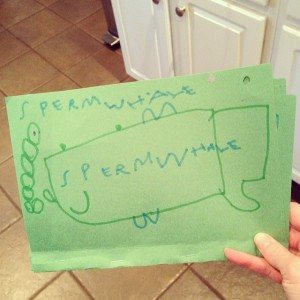 He loves learning no matter how much he whines getting out of bed. I never leave him unhappy at dropoff (unlike his brother…another story). Kevin was reading aloud a report the other day that 1 out of 3 people don’t know the Earth revolves around the sun. Landon was in another room. I went to him and said “Landon do you know the Earth goes around the room?” He gave me this confused look and said “um  yes mommy. And the sun is a star and it just appears bigger to us because we are closer. It’s what keeps up warm.” WELL OK THEN. My kid is smarter than 2/3 of the population apparently. But while I can have those mom-guilt moments about TV, he loves learning from it. That stuff about the sun? Bubble Guppies. He has been talking about Orcas, sperm whales and honey-badgers for weeks from Wild Kratts. He knows more dinosaur names than I do.

Life at 4.5 is a tricky one but I’m trying to slow down and work through it with him. Just gonna need more wine.