We are coming up on the end of Kindergarten. It has been a great year for us. We had a little rocky start but overall, it was perfect. Landon has grown in ways we couldn’t have imagined. He loves learning and school. That’s what matters, right?

But not only did Landon grow but so did his school. In the fall they officially became a magnet school. Short description there is that they are schools that provide a specific unique curriculum for some kids. There are STEM magnets and arts magnets and museum magnets (no idea) and we are now a immersion magnet. Due to the popularity and success of the immersion program at his school (in it’s 3rd year currently), his school will now take more Spanish immersion kids.  This is wonderful! So going along with that, I figured some folks googling around about the possibility of sending their littles to an immersion school would appreciate my look back on Spanish immersion kindergarten.

Spanish immersion or no, I think we all learn this even though people tell us over and over. Their brains soak up everything be that math or rap lyrics (whoops). I’m sure every parent of a young child is flabbergasted at the things they retain. With the immersion experience, it’s very apparent. They walk into a class and 2 adults ONLY speak Spanish at them. Literally NO English. Before kindergarten, Landon knew a handful of words just like most of us do (Happy Late Cinco de Mayo!). We have about a month of school left and my child is fluent. I’m not joking. He no longer faults to English to his teachers at all while conversing. He now watches cartoons on YouTube in Spanish when we wait for school. He speaks to the TV in Spanish to tell Mickey what mousekatool to choose. But not only is he picking up how to speak Spanish, he is learning the same concepts every kinder is at the same time. He makes up math word problems in Spanish to test us. I keep thinking this will become common place in my head but it’s still amazing every time.

#2 We Underestimate Our Kids

Along those same lines, I see we underestimate him. For one, he is lazy with homework (fair enough). When we tell him to write sentences, he moans and groans and does the bare minimum. The same sentence openings “Yo veo” “Te quiero” “Mi gusta” over and over.  I assumed that was just the level he is at. Oh no. At the teacher conference, she pulled out a book he wrote. A paragraph full of specific adjectives, nouns and verbs. I just stared at it going “um wut?” His teacher read it for us and I literally think my jaw dropped. “en peligro de extinción” spelled perfectly. He didn’t ask to help spell it. Now I feel stupid quizzing him on simple words for animals and high frequency words.

So now when he pulls that “buuuuuut I caaaan’t doooo it” at homework time, I am calling that bullshit.

#3 English is a Confusing Language

Never have I hated English so much. While we are encouraged to read to our child every day in English, we are not to coach him to read English.  This is so he can learn the phonetics of the Spanish alphabet without confusion. So this went well for a long time but Landon slowly started trying to read some books with us. She said not to tell him no but be wary of it and see how he does. O.M.G. the poor kid gets so confused and I feel for him. English makes no damn sense. Simple things like the word “were” are hard to explain to him. I know some of this is that he isn’t learning English high frequency words but hats off to explaining that.

I mentioned above about him spelling a “hard” word in Spanish. This works because it is phonetic. Now I realize that isn’t full proof as people’s accents and dialects can make the sound a little different but,for the most part, it works. He can ALWAYS read a Spanish word even if he doesn’t know what it is. 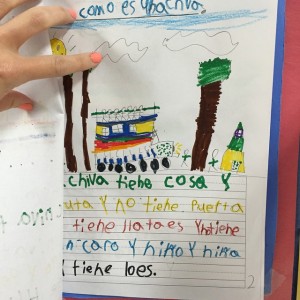 #4 Teaching Culture Along with a Language is Powerful

To go with the Spanish immersion program, Landon’s school is “global” school. All students in the school are introduced to all different cultures and they incorporate it in a lot of what they do. They have a global expo where each class showcases work around a specific country or culture. Landon’s class studied “chivas“. They are used for public transportation in South America.

But don’t just take my word for it. This is Landon’s teacher. She is just so damn loveable. She is from Cali, Colombia. Part of the organization that runs the immersion program for NC specifically hires outside of the US. They want them to bring that culture with them.

Because of this, Landon knows more about Coloumbian traditions and their rainforest unit has been amazing. Today he wore a shirt with frogs on it and I got a diatribe about yellow bellied tree frogs and how they reproduce, poison, etc. Wowsers.

We can’t say enough about this experience and are so ecstatic to be giving Landon this opportunity. I think some parents get nervous with kids learning things they don’t know but I find it amazing. I am so proud of him. He has taken on a HUGE challenge and blossomed. YAY Spanish Immersion!

P.S. Yes I am trying to get these damn comments fixed. BAH