New band name or crazy infection in a toddler’s eye? Spoiler alert: It’s the later. As your resident mom-who-uncovers-medical-weirdness (see pinworms, shingles, hobo iud, asian pear allergy, oh and I have found I’m allergic to sodium lauryl sulfate!), I decided this one was also worth documenting so you know what it is. But first, a story.

Last Thursday, my allergies were kinda crazy. I am claiming it is the Rose of Sharon in the backyard blooming and sending me into sneezing fits. Around the same time, poor little Ollie was rubbing his eyes too. The tyke gets everything from me, it seems. On Friday, he heads off to school just like normal. At lunch time, I get a call from daycare “Ollie just keeps rubbing his eye a lot. Is it allergies?” I explain that I THINK it is but who really knows. They ask if I could give him something to help so he could get some rest at nap. Sure, I say. We have an on campus pharmacy, so I ran up there, grabbed children’s allergy meds and trot to daycare. Sure enough he looks like he has been rubbing it non-stop. Poor Beans. He says he is fine. I give him meds and head back to work. When he wakes up they call and say it’s now swollen and seems to be getting more swollen. Hmmmm. I call on campus healthcare get a 4:15 appt to knock out any doubt before the weekend. I head to pick up Landon and drop Kevin at healthcare with Ollie. 20 minutes later I get a call to get back, we have to go to the ER.

The FNP (and consult with my primary care dr) have determined he has periorbital cellulitis but they can’t do the blood test in the office there…so to WakeMed Children’s ER we are sent. He could also possibly need a CAT scan if it’s bad (hence the children’s ER). Since we are carpooling, we head home to drop me and Landon and pack bags for Kevin and Ollie. Who knows what is going to go down. On the way home I did what all new age moms do. TO THE GOOGLE. And in a shocking turn of events, it was a relief (I know, right?!) We caught it early and most likely the dr would just give him some antibiotics and it should clear right up. 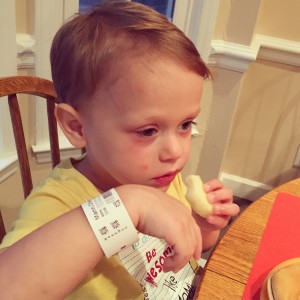 OK but what is it really?

Periorbital cellulitis is an inflammation and infection of the eyelid and portions of skin around the eye. Sounds scary simple, right? Thus the reason I am writing this. If left untreated, it can get really bad including loss of sight and nerve issues. It usually comes from foreign bacteria getting in the eye…usually from a bug bite near the eye. So backing up, on Friday morning I had noted Ollie had a red spot on his cheek but I brushed off as eczema . I guess he got bit by something outside (another lovely mom trait!)

They did not happen to need blood tests or CAT scan. They felt it was pretty clear cut. The boys were home in a few hours. He got some antibiotics and after even 2 doses the swelling was gone and the bug bite was even healing. By Monday he was completely unphased. Go figure.

Moral of the Story

If your kid’s eye look swollen all of a sudden and they complain of it really hurting, go to the doctor. While I am happy everything played out just fine, it still scares me to know that I would have had NO IDEA. If Ollie’s teachers hadn’t said anything seemed that off, I would have just kept calling it allergies. I could explain away it all just like any sniffle or bump. Praise be to Ms. Maria and Mrs Dana.

WHO SAYS STRANGERS ARE RAISING MY BABIES NOW, MOTHER EFFERS?!?!