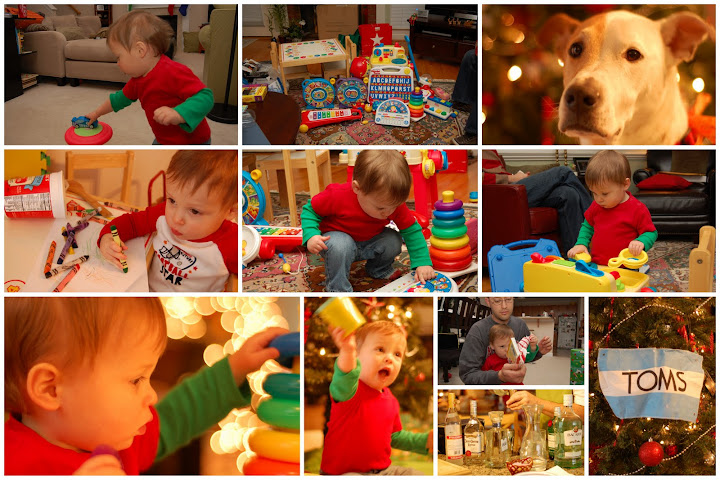 So…yeah…a little late. I was putting this off because I couldn’t just slap up photos and a video and call it a day *sigh*. Well Christmas this year was a lot better than last…not gonna lie. The dog is in good health, the baby sleeps, I am no longer a food source, and he can actually play with stuff. O and it snowed. Yippee!

Christmas Eve, Kevin, Landon and I took the day off and putzed around. That night, we went over to Craig’s (the guy who married us) house for his annual bash. We had to go early because SOMEONE’S bedtime….but he even held out and we didn’t leave until 8! He was having so much fun chasing his new friend Caroline(see below). I was so proud of him because Craig has a lot of little nick nacks around and Landon never tried to touch ANY of them…even the lit candles!

Even though Landon likes toys, he still doesn’t “get” Christmas yet. That being said, we weren’t going to do much. We decided we would get him 1 “big” thing and then just some books and a few small toys. Our big gift was a sit and spin.

He is still a little small for it…but he is getting the idea. We figure it will grow with him for a bit. We also got him a few little board books. These were more for us in the hopes that he will choose them over some he likes. We are only kidding ourselves. He also got some play doh. We know he likes it at school and heck…it’s fun to play with. He plays somewhat with it but doesn’t have that much of an attention span.

Now we also knew that we should go small on Christmas because we would be outdone by the grandparents. Boy were we right. As you can see from the photos above, he hit the jack pot at Grandmommy and Grandaddy’s first thing. Holy hell. She scored big on a bunch of second hand toys on the Bulletin Board at work. It wasn’t wrapped…just a sheet over them all…like we were unveiling a car or something. Geez! We had to leave some of the stuff at Grandmommy’s because we don’t have the room at the house. We did take the table set home along with a few of the smaller classic toys. We had been sitting him at the dining room table for crafts and coloring but it was messing with my feng shui moving stuff all the time to make room. The table has been fantastic and it only took him about a day and a half to figure out how to climb in the seat himself. He loves to color at it and is learning to put his crayons away when he gets up from the table. So cute.

After a change of plans from the weather, Grandma Judy came up Christmas day instead and brought MORE stuff. He got some new clothes, books, a dinosaur that wiggles and a stuffed Grinch dog(did he have a name?). He is in toy heaven. Grandma stayed with us until Tuesday and we did some shopping and bopping around Raleigh in the snow. Woot!

As for Kevin and I, we didn’t do to bad on the Santa loot either. Kevin found a deal on Cyber Monday on a receiver and speakers for the TV and so he had ordered that. We really like it and it does a fine job. I also got him some movies on super sale, some toy story legos, and some stickers for the ipad, mac and iphone. They are retro apple logos. Neat!

I scored a new camera bag I wanted after reading Becoming Mom’s post. It is from Jo Totes and it is fabulous. Super big and holds everything…including MY NEW LENS! I got a 50mm f/1.8 for taking portraits. It is taking some getting used to because with my camera body, it doesn’t auto focus…so I have to go old school. First time I used it though, I got AMAZING results…see: 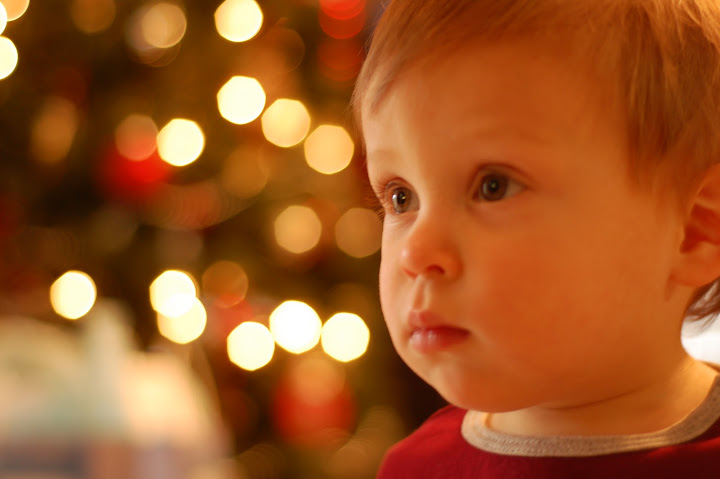 I also got an engraved necklace with Landon’s name and birthstone from Etsy with matching earrings. I got some glittery Toms.

Kevin’s parents made us a cornhole set for the backyard and got us a heater for the new porch(yeah gonna blog about it soon, I promise). My mom got us a sweet gift card to GAP, a new calendar, and a swanky iPad case! We got even more but I don’t want to just go on and on :).

Man am I tired writing all this out…try living it. A week at home with a toddler is a ‘special’ kind of ‘vacation’. Speaking of…gotta wrap this up…he will be awake soon!